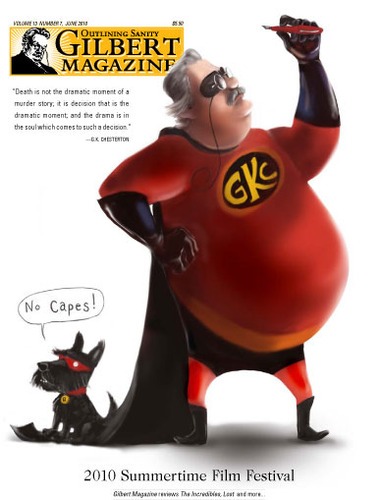 8 | Straws in the Wind
A Proper View of Machines by G.K. Chesterton

11 | Schall on Chesterton
Leisure: On The “Great Art of Doing Nothing” by James V. Schall, S.J.

12 | Tales of the Short Bow
Dryads by John Peterson
The Alliance by James G. Bruen, Jr.

16 | All Is Grist
Gilbert: A Creator by Donald DeMarco
The Snatcher on the Fly by Joe Campbell
Tolerance by James Tilman

20 | The Signature of Man
“Photographic” Paintings

24 | The Battle with the Dragon
Homes and Holmes by Kyro R. Lantsberger

25 | All I Survey
See You in the Funny Papers by David W. Fagerberg

33 | The Ballad of Gilbert
Ubi Ecclesia by G.K. Chesterton

46 | The Distributist
For Victory by Richard Aleman