Who is this Guy and Why Haven’t I Heard of Him? 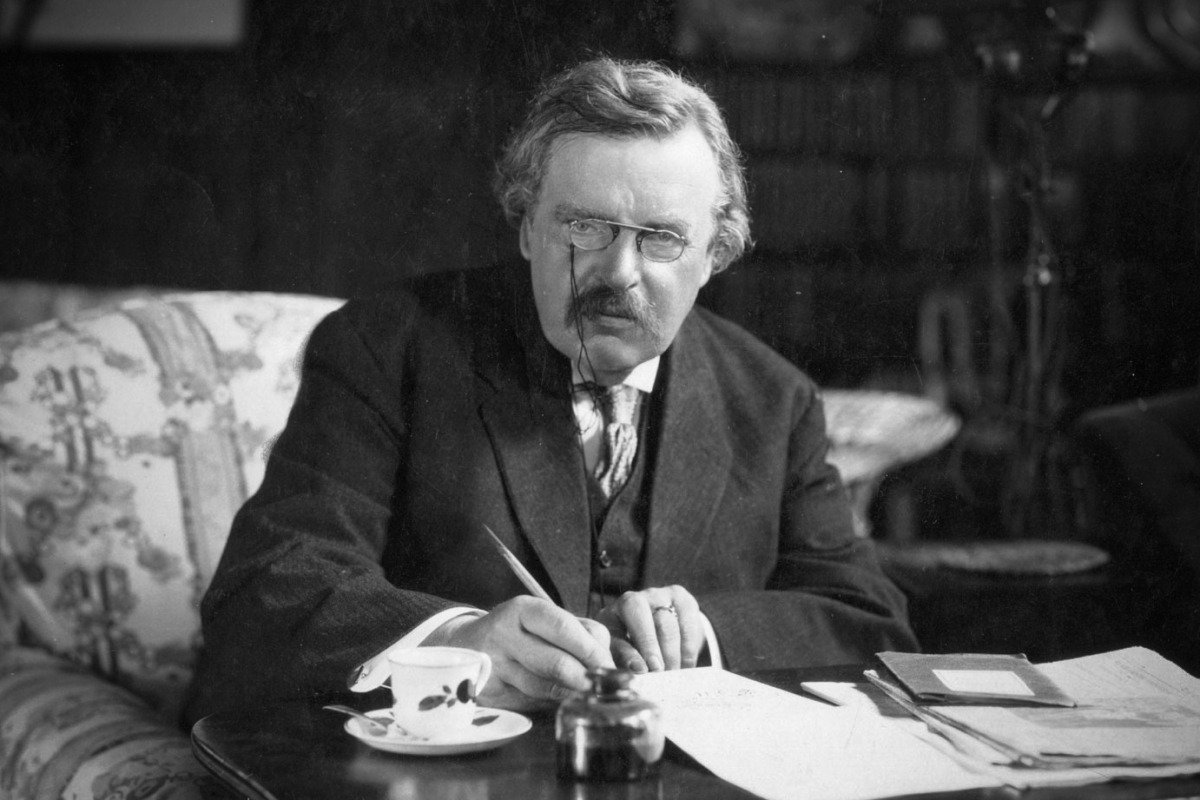 I’ve heard the question more than once. It is asked by people who have just started to discover G.K. Chesterton. They have begun reading a Chesterton book, or perhaps have seen an issue of Gilbert, or maybe they’ve only encountered a series of pithy quotations that marvelously articulate some forgotten bit of common sense. They ask the question with a mixture of wonder, gratitude and…resentment. They are amazed by what they have discovered. They are thankful to have discovered it. And they are almost angry that it has taken so long for them to make the discovery.

Gilbert Keith Chesterton (1874-1936) cannot be summed up in one sentence. Nor in one paragraph. In fact, in spite of the fine biographies that have been written of him, he has never been captured between the covers of one book. But rather than waiting to separate the goats from the sheep, let’s just come right out and say it: G.K. Chesterton was the best writer of the 20th century. He said something about everything and he said it better than anybody else. But he was no mere wordsmith. He was very good at expressing himself, but more importantly, he had something very good to express. The reason he was the greatest writer of the 20th century was because he was also the greatest thinker of the 20th century.

Born in London, G.K. Chesterton was educated at St. Paul’s, but never went to college. He went to art school. In 1900, he was asked to contribute a few magazine articles on art criticism, and went on to become one of the most prolific writers of all time. He wrote a hundred books, contributions to 200 more, hundreds of poems, including the epic Ballad of the White Horse, five plays, five novels, and some two hundred short stories, including a popular series featuring the priest-detective, Father Brown.

In spite of his literary accomplishments, he considered himself primarily a journalist. He wrote over 4,000 newspaper essays, including 30 years worth of weekly columns for the Illustrated London News, and 13 years of weekly columns for the Daily News. He also edited his own newspaper, G.K.’s Weekly. (To put it into perspective, four thousand essays is the equivalent of writing an essay a day, every day, for 11 years. If you’re not impressed, try it some time. But they have to be good essays – all of them – as funny as they are serious, and as readable and rewarding a century after you’ve written them.)

Chesterton was equally at ease with literary and social criticism, history, politics, economics, philosophy, and theology. His style is unmistakable, always marked by humility, consistency, paradox, wit, and wonder. His writing remains as timely and as timeless today as when it first appeared, even though much of it was published in throw away papers.

This man who composed such profound and perfect lines as “The Christian ideal has not been tried and found wanting; it has been found difficult and left untried,” stood 6’4″ and weighed about 300 pounds, usually had a cigar in his mouth, and walked around wearing a cape and a crumpled hat, tiny glasses pinched to the end of his nose, swordstick in hand, laughter blowing through his moustache. And usually had no idea where or when his next appointment was. He did much of his writing in train stations, since he usually missed the train he was supposed to catch. In one famous anecdote, he wired his wife, saying, “Am at Market Harborough. Where ought I to be?” His faithful wife, Frances, attended to all the details of his life, since he continually proved he had no way of doing it himself. She was later assisted by a secretary, Dorothy Collins, who became the couple’s surrogate daughter, and went on to become the writer’s literary executrix, continuing to make his work available after his death.

This absent-minded, overgrown elf of a man, who laughed at his own jokes and amused children at birthday parties by catching buns in his mouth, this was the man who wrote a book called The Everlasting Man, which led a young atheist named C.S. Lewis to become a Christian. This was the man who wrote a novel called The Napoleon of Notting Hill, which inspired Michael Collins to lead a movement for Irish Independence. This was the man who wrote an essay in the Illustrated London News that inspired Mohandas Gandhi to lead a movement to end British colonial rule in India. This was a man who, when commissioned to write a book on St. Thomas Aquinas, had his secretary check out a stack of books on St. Thomas from the library, opened the top book on the stack, thumbed through it, closed it, and proceeded to dictate a book on St. Thomas. Not just any book. The renowned Thomistic scholar, Ettienne Gilson, had this to say about it:

I consider it as being without possible comparison the best book ever written on St. Thomas. Nothing short of genius can account for such an achievement. Everybody will no doubt admit that it is a ‘clever’ book, but the few readers who have spent twenty or thirty years in studying St. Thomas…cannot fail to perceive that the so-called ‘wit’ of Chesterton has put their scholarship to shame. He has guessed all that which we had tried to demonstrate, and he has said all that which they were more or less clumsily attempting to express in academic formulas. Chesterton was one of the deepest thinkers who ever existed; he was deep because he was right; and he could not help being right; but he could not either help being modest and charitable, so he left it to those who could understand him to know that he was right, and deep; to the others, he apologized for being right, and he made up for being deep by being witty. That is all they can see of him.

Chesterton debated many of the celebrated intellectuals of his time: George Bernard Shaw, H.G. Wells, Bertrand Russell, Clarence Darrow. According to contemporary accounts, Chesterton usually emerged as the winner of these contests, however, the world has immortalized his opponents and forgotten Chesterton, and now we hear only one side of the argument, and we are enduring the legacies of socialism, relativism, materialism, and skepticism. Ironically, all of his opponents regarded Chesterton with the greatest affection. And George Bernard Shaw said: “The world is not thankful enough for Chesterton.”

T.S. Eliot said that Chesterton “deserves a permanent claim on our loyalty.”

Why haven’t you heard of him?

There are three answers to this question:

Perhaps it is proof that education is too important to be left to educators and that publishing is too important to be left to publishers, but there is no excuse why Chesterton is no longer taught in our schools and why his writing is not more widely reprinted and especially included in college anthologies. Well, there is an excuse. It seems that Chesterton is tough to pigeonhole, and if a writer cannot be quickly consigned to a category, or to one-word description, he risks falling through the cracks. Even if he weighs three hundred pounds.

But there is another problem. Modern thinkers and commentators and critics have found it much more convenient to ignore Chesterton rather than to engage him in an argument, because to argue with Chesterton is to lose.

Chesterton argued eloquently against all the trends that eventually took over the 20th century: materialism, scientific determinism, moral relativism, and spineless agnosticism. He also argued against both socialism and capitalism and showed why they have both been the enemies of freedom and justice in modern society.

And what did he argue for? What was it he defended? He defended “the common man” and common sense. He defended the poor. He defended the family. He defended beauty. And he defended Christianity and the Catholic Faith. These don’t play well in the classroom, in the media, or in the public arena. And that is probably why he is neglected. The modern world prefers writers who are snobs, who have exotic and bizarre ideas, who glorify decadence, who scoff at Christianity, who deny the dignity of the poor, and who think freedom means no responsibility.

Dale Ahlquist is the president of the Society of Gilbert Keith Chesterton. Click here to learn more.

G.K. Chesterton has helped millions break the bonds of spiritual isolation and despair.  Let us know how he has impacted your life or read testimonies from others. Light a candle