QUESTION: Is there any truth to the accusation that G.K. Chesterton was anti-Semitic?

ANSWER: For those of us who love Chesterton, we are always distressed to see him falsely accused of something vile. But we have gotten a little tired of the charge of anti-Semitism. He has been absolved of that charge too many times for us to count – from the tribute by Rabbi Stephen Wise to the official statements of the Weiner Library (the archives of anti-Semitism and holocaust history in London). The charge is usually made thoughtlessly or ignorantly. But in some cases it is made knowingly and deceitfully. It is a calumny against the man who said “The world owes God to the Jews,” and “I will die defending the last Jew in Europe,” who was sought out by Jewish leaders in his support for Zionism, a man who hated racism and racial theories and who fought for human dignity and always affirmed the brotherhood of all men.

The American Chesterton Society devoted an entire issue of Gilbert to address the charge of anti-Semitism against Chesterton. We bring out the facts and we also let him defend himself in his own words. We would be happy to debate anyone on a point-by-point basis who insists on repeating the false charge. 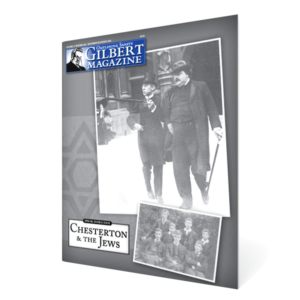