A Century of Other Evils

Dale Ahlquist
From the January/February 2022 Issue of Gilbert Magazine

It was about eugenics.

The pretty word means the controlled and selective breeding of human beings. Only the best of the human race should reproduce. The rest shouldn’t. In fact, they should be prevented from doing so. The word and the idea came from a certain Sir Francis Galton, who was simply applying to people his cousin’s popular theory about animals. His cousin was Charles Darwin.

Among the people who enthusiastically embraced eugenics was Margaret Sanger, who helped found the American Eugenics Society. She was also the editor of the Birth Control Review. And founding mother of Planned Parenthood. Her mantra: “More Children for the Fit. Less for the Unfit.” And who were the unfit? In her own words: “Hebrews, Slavs, Catholics, and Negroes.” It was only in their neighborhoods that Sanger opened her Birth Control clinics, and she wrote that such people should apply for official permission to have babies “as immigrants have to apply for visas.”

Another advocate of eugenics: Adolf Hitler.

Members of Sanger’s American Birth Control League visited Nazi Germany, sat in on sessions of the Supreme Eugenics Court, and returned with glowing reports of how the Sterilization Law was “weeding out the worst strains in the Germanic stock in a scientific and truly humanitarian way.”
Only one person wrote a book predicting the potential and likely horrors arising from eugenics. G.K. Chesterton. It has been one hundred years since Eugenics and Other Evils appeared. I’ve written before about this book but since we are noting its 100th anniversary, and since it seems even more prophetic than ever, I don’t mind repeating myself. I certainly don’t mind repeating Chesterton.

Though the word has disappeared, the philosophy remains. The fundamental idea behind eugenics is the same idea behind contraception, abortion, euthanasia, and even cloning. It is based on denying an entire class of humans their humanity. With eugenics it was the “unfit,” which usually meant the poor, the weak, or simply the ethnic-types who were just having too many children. With abortion, there is a perceived benefit to someone by eliminating the weakest and most defenseless of humans: the unborn. As Chesterton says with chilling accuracy: “They seek his life in order to take it away.”

It is about the tyranny of the elite deciding who shall live and who shall die. And if it’s about the elite, it’s about money. It was the Rockefellers and the Carnegies and other capitalist lords who funded eugenics research in the early 20th century. They went on to be major supporters of Planned Parenthood. Chesterton says that wealth, and the social science supported by wealth tries inhuman experiments, and when they fail, they try even more inhuman experiments. They are inhuman because they are godless. But they are godless because they don’t want to face how inhuman they are. The wealthy industrialist became agnostic, says Chesterton, “not so much because he did not know where he was, as because he wanted to forget. Many of the rich took to scepticism exactly as the poor took to drink; because it was a way out.”

Eugenics is also about the tyranny of science. Forget the tired old argument about religion persecuting science. Chesterton points out the obvious fact that in the modern world, it is the quite the other way around.

The thing that really is trying to tyrannize through government is Science. The thing that really does use the secular arm is Science. And the creed that really is levying tithes and capturing schools, the creed that really is enforced by fine and imprisonment, the creed that really is proclaimed not in sermons but in statutes, and spread not by pilgrims but by policemen – that creed is the great but disputed system of thought which began with Evolution and has ended in Eugenics. Materialism is really our established Church; for the Government will really help it to persecute its heretics. Vaccination, in its hundred years of experiment, has been disputed almost as much as baptism in its approximate two thousand. But it seems quite natural to our politicians to enforce vaccination; and it would seem to them madness to enforce baptism.

Chesterton says the problem with official science is that it steadily becomes more official while it becomes less scientific. “The man in the street,” he says, “must be wholly at the mercy of an academic priesthood.”

The words ring true today. If anyone stands up for common sense on a controversial issue relating to medicine or the human body, they are barraged with what Chesterton calls “the same stuffy science, the same bullying bureaucracy, and the same terrorism by tenth-rate professors.”

But of course we have to stand up anyway. That is the work of the Apostolate of Common Sense. We must keep fighting the battle that Chesterton described 100 years ago. Let’s be a light to the world by welcoming babies and loving them and teaching them to love. Let’s pray at abortion clinics. And maybe we should start praying outside of pharmacies, too. Let’s start changing people’s minds – even the tenth-rate professors – by showing them what truth looks like. 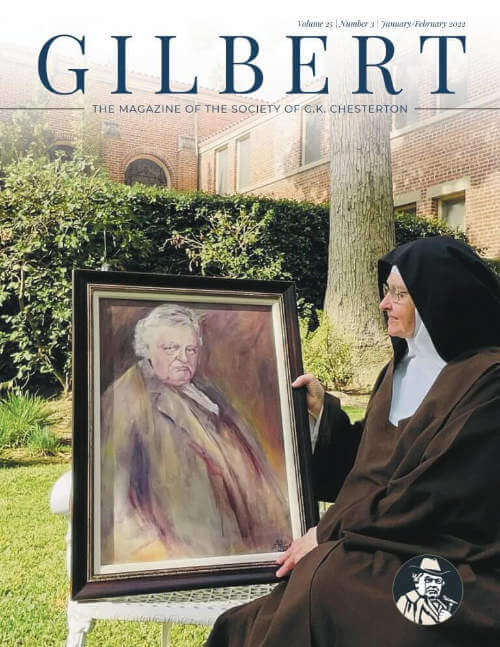