Andrew Youngblood
From the January/February 2021 Issue of Gilbert Magazine

In June of 2019, Theresa Krueger, Executive Director of Teach for Christ, received an email from a young gentleman, Steven Swain. Teach for Christ is an organization associated with the Apostolate of Common Sense that trains missionary educators and places them within Catholic schools to serve as teachers and mentors. Having graduated from Baylor University the previous year, Swain was already serving as a missionary educator. At the behest of his archbishop, Steven was contacting Teach for Christ to thank them for their ministry and to inquire if the organization might be interested in sending missionaries to join him in his work.

Through this initial contact, Swain soon started a conversation with the Chesterton Schools Network.  In addition to potential missionaries, Swain was also interested in having their existing high school adopt the Chesterton curriculum. On the one hand, this request was not strange. The Executive Director of the Chesterton Schools Network, Emily de Rotstein, receives similar inquiries nearly every day. The Chesterton Schools Network, commonly known as CSN, is currently experiencing explosive growth with over 10 new schools opening this past September, bringing the current total to nearly 30 schools. Demand is so great that the network is projected to have more than 100 schools within the next ten years. Most inquiries come from within the United States, but requests have come from Canada, Latin America, and throughout Europe. The CSN has even received an inquiry from Australia.

Nonetheless, this new request was unique. Steven Swain was inquiring at the request of Bashar Warda, the Archbishop for the Chaldean Catholic Archeparchy of Arbil in Erbil, Iraqi Kurdistan. Located in the North-Central region of the country and sharing a border with Turkey, Erbil sits in the cradle of civilization. The diocese itself is directly subject to the Patriarchal See of Babylon. Under the guidance of Archbishop Warda, who has been the shepherd of the archeparchy since 2010, the Catholic community of Erbil has become a center of Christianity in the region. Having played a leading role in the care of displaced Christians during the ISIS invasions in 2014, Warda has also established the Catholic University of Erbil along with several youth organizations and healthcare agencies. He now wishes to continue his efforts by establishing a Chesterton Academy in his diocese.

The Chesterton Academy of St. Thomas the Apostle at Mar Qadakh School in Erbil, Iraq is scheduled to open in the fall of 2021.

This opportunity has created a great deal of excitement throughout our apostolate. From curriculum development to missionary outreach to international exposure, this new endeavor brings our message and our mission to the world in a new and exciting way.

As Director of Curriculum and Instruction, I guide the process of enhancements and modifications to the curriculum within the network. I assist network schools with teacher training, curriculum implementation and, when necessary, adaptations. Personally, this has been a dream job. I have a passion for the development of curriculum, but, over the years, I have come to realize that this is not something I share with most people. I have seen many an eye glaze over at a party when I start to cut loose on the narrative arc between the Iliad and the Aeneid. I find people excusing themselves when I embark on a passionate description of the merits of Euclidean Geometry. And I am always amazed at how many people need to top off their drink when the topic comes up of whether Mendeleev’s discovery of the Periodic Table of Elements can be counted as a form of natural revelation. So for me, when the necessity of adapting the Chesterton Schools Network curriculum to the Arab world presented itself, it was like being asked to play in the Superbowl of curriculum development. I could not, and still cannot, contain my excitement.

The opportunity for a truly worldwide outreach through Teach for Christ missionary educators, the shared Chesterton curriculum, and the network community of schools goes far beyond what co-founders Tom Bengtson and Dale Ahlquist envisioned as they ate breakfast in 2007 and formulated the idea to open the first Chesterton Academy. That first school opened with ten students around a table, full of excitement and trepidation. It is a beautiful and powerful metaphor for the eleven scared and confused men huddled together in a locked room in Jerusalem. The Society of G.K. Chesterton is doing the work of the Church, bringing the Gospel message and the living encounter with Jesus Christ to students throughout the country and around the world.

This March, a delegation from the CSN will travel to Erbil to continue the work that has already begun with Ms. Hala Warda, the headmistress of Mar Qadakh School. Originally scheduled for February, the trip was moved at the request of the archbishop so that the visit and work of the CSN in establishing a Chesterton Academy can coincide with the first papal visit to Iraq by Pope Francis. Our delegation will be in Erbil during the papal visit to the city and we will be able to bring the missionary work of the apostolate and of the CSN to the attention of the Holy Father. As the society continues the cause for G.K. Chesterton’s canonization, such international and ecclesial exposure comes at a providential moment. And all of this exposure, this missionary opportunity, and expansion of the network started with a simple email. Although I have not yet had the chance to ask him myself, I have little doubt that Steven Swain said a prayer of blessing as he hit send on his email—just as Chesterton would say grace before he dipped his pen in ink. 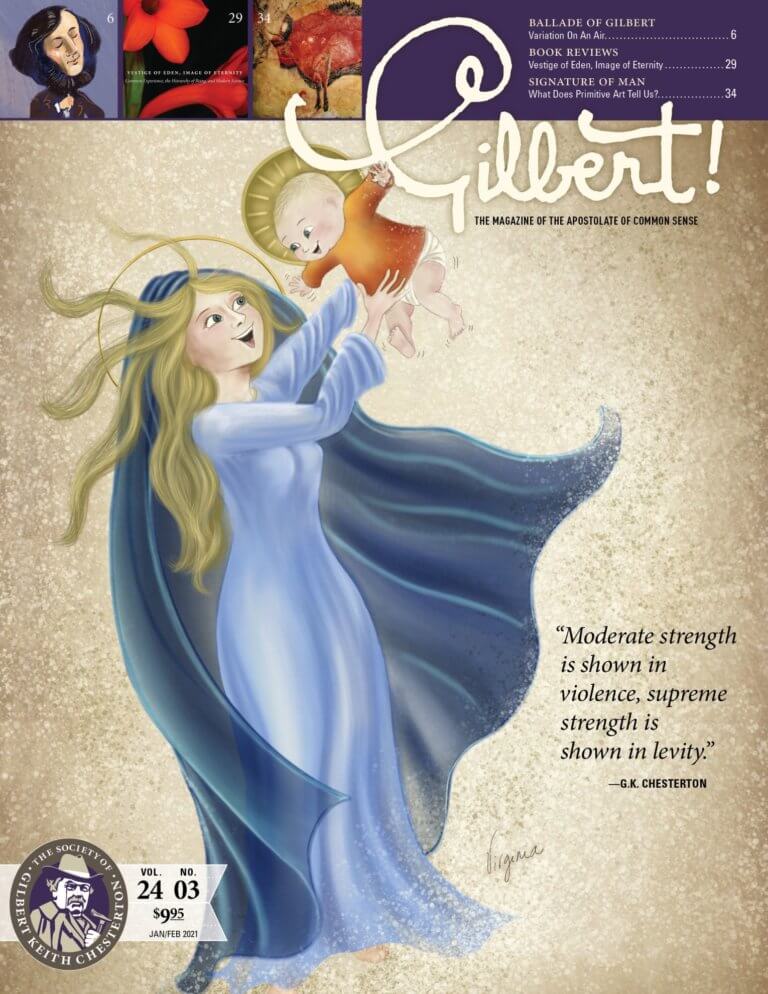