Dale Ahlquist
From the May/June 2021 Issue of Gilbert Magazine

There are two ways of looking at the world.

We can focus on the decline of our civilization, the collapse of our institutions that are supposed to represent us, the loss of truth in politics and public discourse, the caprice of tyranny, the assertion of godless philosophies, the unreliability of information, the loss of control over the daily matters of our lives, and the accompanying widespread despair.

Even the materialists who believe we began as an agitation in primordial slop are horrified to think that we might now be the agent to destroy the whole vat. The earth cannot be saved. They are as sensational as the fanatics who are preaching essentially the same scenario that the fulfillment of the apocalyptic vision of Christianity is about to come to pass. Even the less cynical humanist can fret over the imminent collapse of the environment, and the less-feverish economist can legitimately worry about the supply chain falling apart, and the less fanatical Christian who believes in the Final Judgment (the idea that we are responsible for our actions) can settle into the view that the end is near. The Judge is knocking on the door.

And that’s all well and good. But there is another way of looking at things.

There is nothing new under the sun, and this has all happened before. We can reasonably make the case that our civilization has always been threatened by some sort of crisis, has always had to deal with leaders who behave badly, people who deal dishonestly, diseases that are disrespectful of individuals, enemies who are ruthless, and institutional stupidity that operates on a large scale. We are not the first to feel that our cause has been forsaken. Yet, a quick overview of history, both ancient and modern, will show that we have survived. Even progressives will admit it. An honest assessment of the Church will demonstrate that we have spread the Christian faith to the far corners of the earth with rather glorious results. Every culture has added saints to the Communion. Where truth has spread, so has beauty and goodness. We have created wondrous art. We have brought comfort and healing and relief to the poor, the oppressed, the sick.

But why is the world afraid of the Church? Not because of its power. The only power it has is as a force for good, which it accomplishes only with humility and charity and self-sacrifice. In other words, it is because of its unconquerable weakness that it survives and boosts up the culture that would destroy it. People fear the Church for the same reason they fear death, not for what it means for the body, but for what it means for the soul.

Part of our fear comes from idolatry, believing in the wrong things, trusting in the things we have made rather than trusting in God. G.K. Chesterton also points out that idolatry is committed, “not merely by setting up false gods, but also by setting up false devils; by making men afraid of war or alcohol, or economic law, when they should be afraid of spiritual corruption and cowardice.”

St. John Paul II began his papacy with Christ’s words, “Be not afraid.”

This is the other way of looking at the world. Be not afraid.

Be not afraid of the Truth that will set us free. And be not afraid to argue for the Truth. No one has to believe us. But they might. They might also try to silence us. And persecute us. And kill us. Be not afraid.

If the world is falling apart at its very foundation, take advantage of the earthquake and convert the guards.

Abide by the calming words of Psalm 4, which Cistercian monks chant at the end of the day: “Ponder on your bed and be still. Make justice your sacrifice and trust in the Lord.” 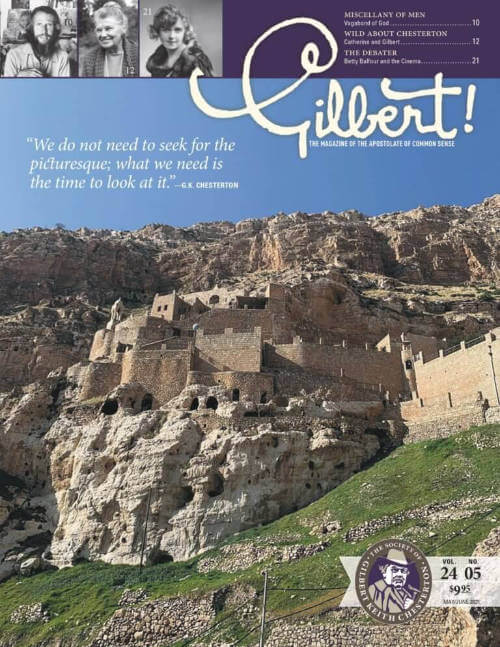