Gilbert Keith Chesterton Answers His Mail
From the March/April 2020 Issue of Gilbert! Magazine

Dear Mr. Chesterton,
What’s the difference between a farmer and a financier?

Dear Agros,
The farmer does farm; whereas the financier does not finance. As a rule, he only induces farmers and similar people to finance him.

Dear Mr. Chesterton,
What’s the difference between pity and sympathy?

Dear Pathos,
Pity is quite a different thing from sympathy; for sympathy means suffering with others, and not merely being sorry that they suffer. We must not only share our bread, but share our hunger.

Dear Mr. Chesterton,
What’s the difference between Easter and Pagan rituals celebrating the return of Spring?

Dear Mythos,
Easter, which opens on earth the gateway of the Spring, has been for all our race and culture the season of Resurrection. But in diseased conditions like our own, there has come to be a standing quarrel between two schools, about the order of the two ideas. Christians and all inhabitors of the ancient culture feel that Spring is the symbol of Easter. Materialists, notably all sorts of atheist anthropologists, hold that Easter was only the symbol of Spring. Professors of folk-lore insist- ed that primitive men (with whom they seemed to be on very intimate terms) had made up a rather unnatural masquerade of myth, merely to cover the natural facts of experience. They concealed the fact that the flowers return, under the parable of a god returning. By the time that commonsense began to pluck up courage to question what were called the Conclusions of Science, it became apparent that there were a good many questions which Science could not answer; and a good many points on which her conclusions were anything but conclusive. Why should anyone want to cover up ordinary facts with an extraordinary story? Why should anybody think he could keep the grass a secret, by the invention of a grass-god? And why could not primitive men be primitive enough to leave plain facts as they were? Was it not much more natural to imagine flowers or foliage as ornaments for a god or hero, than to imagine a hollow idol invented only to stand between men and flowers? Is it not more sane to say that the visible renewal of the earth gives hints or signs to those who already believe in heaven? But whatever mysteries were accepted by the ancient Pagans have become mere mystifications in the minds of the modern Pantheists … There is nothing but nonsense, therefore, in all pretences that the mere round of Nature itself is the source of our highest hopes; or could by itself have evolved all that is meant by Resurrection. It is the soul that has received an unspeakable secret from heaven, which it can only express in images of the earth; and naturally expresses in terms of the temporary resurrections of the earth. In other words, it uses Spring as a symbol of Easter; not Easter as a symbol of Spring.

Chesterton’s Mail Bag is a featured section of Gilbert Magazine. 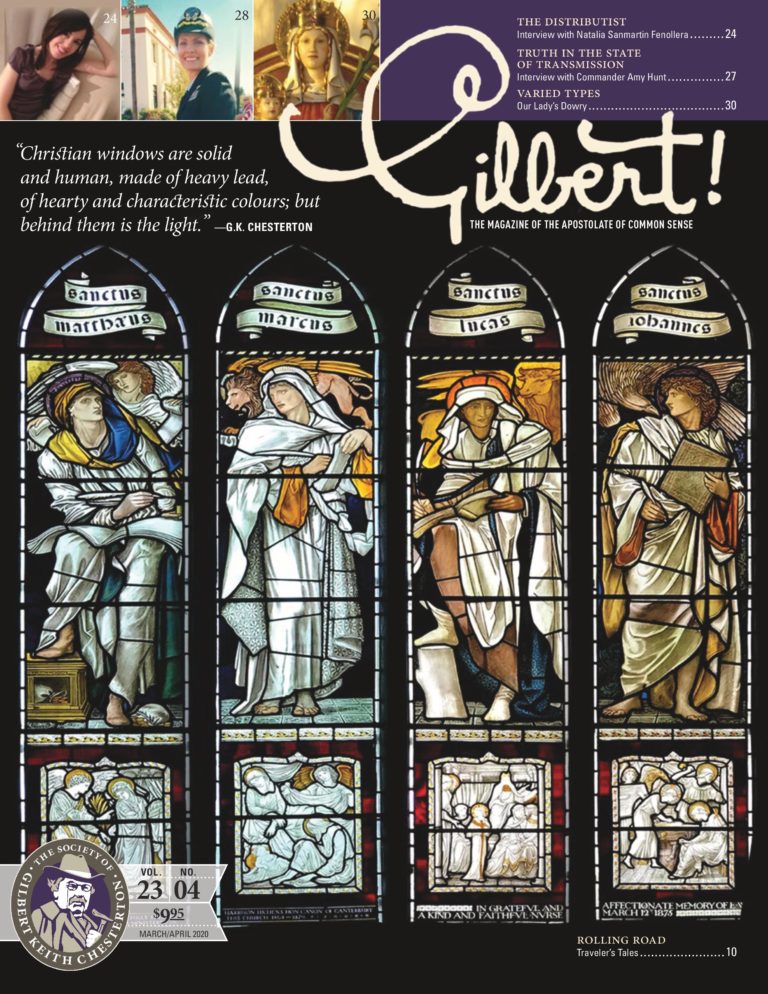