Chesterton Gets a Standing Ovation

Joe Grabowski
From the November/December 2022 Issue of Gilbert Magazine

“Fires will be kindled to testify that two and two make four. Swords will be drawn to prove that leaves are green in summer.”

These were the words with which Giorgia Meloni, the presumptive next Prime Minister of Italy, concluded a portion of a speech that went viral on social media, hours after her political party, Frateli d’Italia, had swept the Italian general election in late September. Meloni noted in the clip that she was quoting Chesterton, but did not give the precise source. The lines are from the final paragraph of Chesterton’s book, Heretics (1905). Taking a look at the context of the quotation, one can easily surmise why the sentiments should resonate with Meloni and her audience: as is often the case, Chesterton seems eerily prescient about our own age.

He speaks of how “[t]he modern world is filled with men who hold dogmas so strongly that they do not even know that they are dogmas.” In turn, he explains, believers are forced to adopt their own dogmatism not merely about the truths of the faith, but about the simple facts of the cosmos. He warns that “the great march of mental destruction will go on. Everything will be denied. Everything will become a creed.” As modernist denials of reality become credal tenets, Christian defenses of reality become something like religious asseverations as well: “It is a reasonable position to deny the stones in the street; it will be a religious dogma to assert them. It is a rational thesis that we are all in a dream; it will be a mystical sanity to say that we are all awake.”

Meloni is a controversial figure, to be sure. The challenge, as with so many modern controversies, particular political ones, is sorting the legitimate from the illegitimate reasons for controversy. There are, doubtless, policy positions and views Meloni and her party hold with which people of good will may well disagree. Surely some of the attacks on her are based on more dubious grounds, though: for at least some of her “controversial” views simply shouldn’t be controversial. For example, the defense of life from conception to natural death; or the maintenance that sex is a reality founded in biology rather than an ephemeral concept born of ideology; or the belief that children deserve both a mother and a father, and that women should not be turned into broodmares for hire for rich eugenicists. These are mere facts; they’ve always been true. What has changed is the world’s willingness to adhere to them. Nowadays, merely stating such a simple fact is considered not only merely one’s “opinion,” but a hateful and bigoted one at that! No wonder the crowd cheered so loudly to hear someone standing up and declaring that she, for one, will not be cowed into silence and made to pretend that two and two make five.

The impetus behind the viral clip of Meloni’s speech, in the end, wasn’t Meloni herself, however impressive people may find her. What inspired the crowd that day, and what inspired the social media frenzy over her rousing remarks, was the content of the message. And the most remarkable thing about that is how unremarkable it really is. She wasn’t pronouncing some new and startling discovery, but truths as old as the earth. She was simply standing up and saying that the sky is blue – to thunderous applause. That is the real takeaway from the moment. People are still yearning for the clear statement of timeless truths, in place of the shouted Shibboleths of the dogmatic progressive mob. People starved of that truth, force-fed lies instead, will even sometimes eventually bite the hand dishing it out.

Whether Meloni will live up to the hopes generated by her speech remains to be seen; as we have said, not all of her policies may bear the weight of that expectation. But it is practically beside the point. We know that our hope, ultimately, is neither in men, nor the princes of men, but in the Lord. There will always be those willing to stand up and announce truth, even when others fail. There will always be those hungering for truth, who will listen and eagerly take it up as their own creed, be it the truth that God is Three in One, or the more simple truth that two and two make four, or that every human being originates at conception. Precisely this never-ending thirst for truth, alongside the persistent denials of it by the world, the flesh, and the devil, also guarantees something else. It guarantees that Chesterton will never cease to inspire new audiences to cheer for the announcement that the grass is green. It guarantees that we at the Society of Gilbert Keith Chesterton will never lack wonders with which to startle the world, simply by pointing out, as Chesterton does, what is right in front of people’s own eyes. The world’s truisms are stale and old the moment they’re printed in the newspapers, ready to wrap a dead fish. It is Chesterton’s truth – the truth we share – that, being ever ancient, remains ever new. And it always deserves a standing ovation.

Joe Grabowski is the Vice-President of Evangelization and Mission for the Society of Gilbert Keith Chesterton. 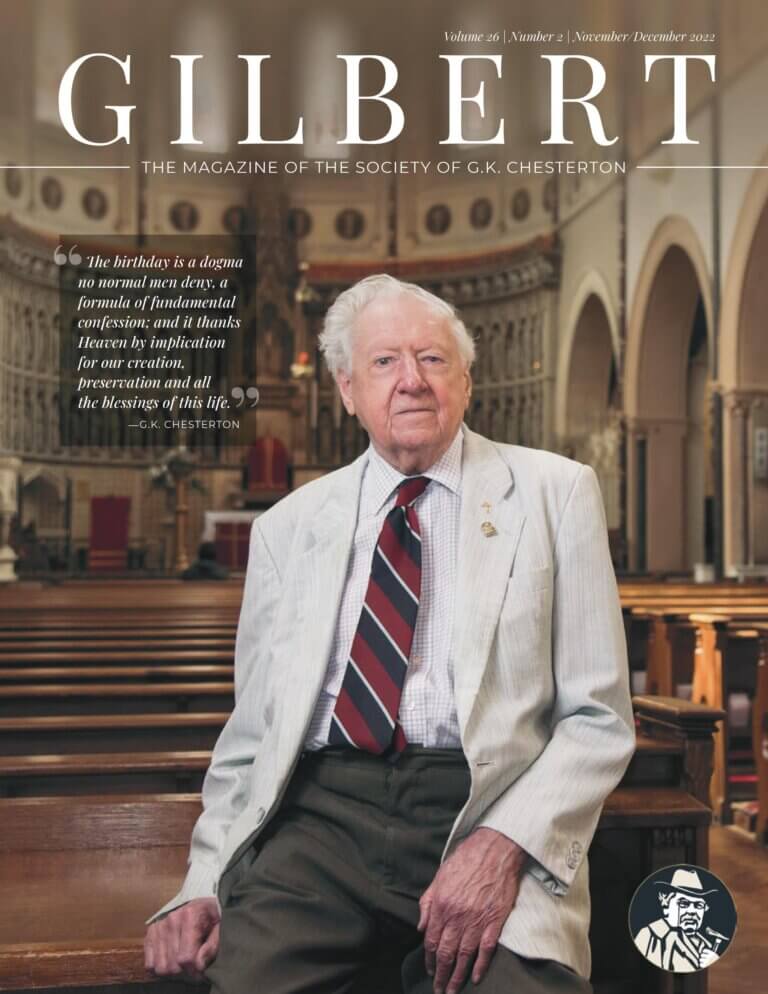