Government and the Rights of Man Skip to content

Government and the Rights of Man

Lamenting the intrusion of government on the rights of man

I could never see why a man who is not free to open his mouth to drink should be free to open it to talk. Talking does far more direct harm to other people. The village suffers less directly from the village drunkard than it might from the village tale bearer, or the village tub-thumper, or the village villain who seduces the village maiden. These and twenty other types of evil are done simply by talking; it is certain that a vast amount of evil would be prevented if we all wore gags. And the answer is not to deny that slander is a social poison, or seduction a spiritual murder. The answer is that, unless a man is allowed to talk, he might as well be a chimpanzee who is only able to chatter. In other words, if a man loses the responsibility for these rudimentary functions and forms of freedom, he loses not only his citizenship, but his manhood.

But there are other personal liberties still permitted us, more elaborate and civilized than that simple human speech which is still closely akin to the chatter of the chimpanzees. By some official oversight, which I am quite unable to explain, we are still allowed to write private letters if we put them in public pillar-boxes. The Postmaster-General does not write all our letters for us; even the local postman has as yet no such local powers. I cannot conceive how it is that reformers have failed to note the need for uniting, reorganizing, coordinating, codifying, and linking up all this complex, chaotic, and wasteful system, or lack of system. There must be vast amounts of overlapping, with some six young gentlemen writing letters to one young lady. There must be a terribly low educational standard, with all sorts of poor people allowed to put into a private letter any spelling or grammar they like. There must be a number of bad psychological habits being formed, by foolish people writing their sons in the Colonies or their mothers in the workhouse. And all this anarchy and deterioration could be stopped by the simple process of standardisation of all correspondence. I know if I use the word “standardisation,” Mr. H.G. Wells will welcome it and begin to think of it seriously [indeed there opens before me a vista of vast social reform].

On the face of it, the first and most obvious method would be for the Government to send round official forms for our friendly correspondence, to be filled up like the forms about insurance or Income Tax. Here and there, even in the most model communication, there would be words left blank, which the individual might be allowed to fill out himself. I have a half-formed ideal of an official love letter, printed in the manner of “I __________ you,” so that the citizen might insert “love,” or “like,” or “adore,” with a view to the new civil marriage; or “renounce,” or “repudiate,” or “execrate,” with a view to the newer and more civil divorce. But even these blanks for verbal variation must be admitted with caution; for the aim of the whole reform is to raise the general level of all correspondence to a height unattainable by the majority of the people as yet.

It may be hinted that I plead for this reform with the passion of self interest, for it would enable me to neglect my correspondence in theory as I already neglect it in practice. I very seldom write to anybody; and I never write to the people I like best. About them I do not trouble, for they understand. But there are unanswered letters from total strangers about which I feel a remorse. Some day I shall make a list of the people I should have liked to answer, or advertise for them by such details as I can remember them. If I had any money I should like to leave them millions of it when I die. It may be said that I should get off cheaply, if the government would sent round to all these people an official card in my name [instead].

But I am not really converted to my own project, even by my own failure. I am not really convinced of the necessity of standardised correspondence, either by the existence of criminal letters or my own criminal neglect of letters. If or when, in some strange mood at some distant date, I should actually answer a letter, I should still prefer to answer it myself. even if I had nothing to write except an apology for not writing, I should prefer my self-abasement to have the character of self-determination.

It is a most extraordinary fact that all modern talk about self-determination is applied to everything except the self. It is applied to the State but it is not applied to the very thing to which its verbal formula professes to apply. I, for one, do believe in that mystical doctrine of democracy, which pre-supposes that England has a soul, or that France has a self. But surely it is much more obvious and ordinary fact that Jones has a self and Robinson has a self. And the question I have here discussed under the parable of the Post Office is not the question of whether there are abuses in drink or diet, as there are calumny and blackmail in any pillar-box or postman’s bag. It is the question of whether in these days the claims of government are to leave anything whatever of the rights of man. 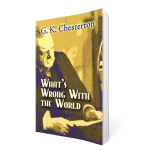