History Versus the Historians

In my innocent and ardent youth I had a fixed fancy. I held that children in a school ought to be taught history, and ought to be taught nothing else. The story of human society is the only fundamental framework outside of religion in which everything can fall into its place. A boy cannot see the importance of Latin simply by learning Latin. But he might see it by learning the history of the Latins. Nobody can possibly see any sense in learning geography or in learning arithmetic – both studies are obviously nonsense. But on the eager eve of Austerlitz, where Napoleon was fighting a superior force in a foreign country, one might see the need for Napoleon knowing a little geography and a little arithmetic. I have thought that if people would only learn history, they would learn to learn everything else. Algebra might seem ugly, yet the very name of it is connected with something so romantic as the Crusades, for the word is from the Saracens. Greek might be ugly until one knew the Greeks, but surely not afterwards. History is simply humanity. And history will humanise all studies, even anthropology.

Since that age of innocence I have, however, realised that there is a difficulty in this teaching of history. And the difficulty is that there is no history to teach. This is not a scrap of cynicism – it is a genuine and necessary product of the many points of view and the strong mental separations of our society, for in our age every man has a cosmos of his own, and is therefore horribly alone. There is no history; there are only historians. To tell the tale plainly is now much more difficult than to tell it treacherously. It is unnatural to leave the facts alone; it is instinctive to pervert them. The very words involved in the chronicles – “Pagan”, “Puritan”, “Catholic”, “Republican”, “Imperialist” – are words which make us leap out of our armchairs.

But there is another possible attitude towards the records of the past, and I have never been able to understand why it has not been more often adopted. To put it in its curtest form, my proposal is this: That we should not read historians, but history. Let us read the actual text of the times. Let us, for a year, or a month, or a fortnight, refuse to read anything about Oliver Cromwell except what was written while he was alive. There is plenty of material; from my own memory (which is all I have to rely on in the place where I write) I could mention offhand many long and famous efforts of English literature that cover the period. Clarendon’s History, Evelyn’s Diary, the Life of Colonel Hutchinson. Above all let us read all Cromwell’s own letters and speeches, as Carlyle published them. But before we read them let us carefully paste pieces of stamp-paper over every sentence written by Carlyle. Let us blot out in every memoir every critical note and every modern paragraph. For a time let us cease altogether to read the living men on their dead topics. Let us read only the dead men on their living topics.

I have just come by accident on a striking case of what I mean. Most modern notions of the earlier and better Middle Ages are drawn either from historians or from novels. The novels are very much the more reliable of the two. The novelist has at least to try to describe human beings; which the historian often does not attempt. But generally speaking, it is to novels first and then to partisan histories that we owe our impressions of this epoch.

The average modern Englishman’s idea of the Middle Ages is a stratification of several modern views of them which might be summarised thus:

There are in existence medieval memoirs – which are nearly as amusing as Pepys, and much more truthful. In England they are almost entirely unknown. But I am very glad to find that the Chronicles of Joinville and the Chronicle of Villehardouin have been translated into excellent English. Let anyone open Joinville’s rambling story, and he will find the Middle Ages of Macaulay and Rossetti and Dickens and Miss Jane Porter fall from him like a cumbrous cloak. He will find himself among men as human and sensible as himself, a little more brave and much more convinced of their first principles. Joinville reveals himself as innocently as Pepys, and reveals himself as a very much finer fellow. The reader will find it impossible not to respect the man; his lumbering punctiliousness about truth, when he explains what part of a scene he saw himself and what he heard reported; his prompt and instinctive veracity, as when St. Louis asked him, “Is it better to be a leper or commit a mortal sin?” and he answered, “I would rather commit fifty mortal sins”; his perpetual and generous praise of others in battle; his rooted affections and simple pride in the affection of others for him; his slight touchiness about his dignity as a gentleman, which St. Louis rebuked in him, but which is, even to a shade, the exact touchiness of Colonel Newcome. Above all we must thank him for his picture of the Great King in whom the lion lay down with the lamb. The shafts of St. Louis’ judgment fly across the ages and hit the joints in every harness.

I had intended to tell some tales out of these books but I must at least defer them. They would all be to the same tune, the tune to which Chaucer’s pilgrims walked when the Miller with his bagpipes played them out of town. If the eighteenth century was the Age of Reason, the thirteenth was the Age of Commonsense. When St. Louis said that extravagant dress was indeed sinful, but that men should dress well “that their wives might the more easily love them”, we can feel the age that is talking about facts, and not about fads. There was plenty of romance, indeed; we not only see St. Louis giving humorous judgments under a garden tree, we see also St. Louis leaping from his ship into the sea with the shield at his neck and the lance in his hand. But it is not a romance of darkness nor a romance of moonlight, but a romance of the sun at noonday.

From Lunacy and Letters (out of print). Read more about this book in the Chesterton University lecture. 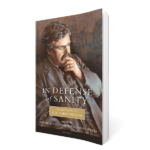 In Defense of Sanity: The Best Essays of G.K. Chesterton