There has been some renewal of debate on the problem of the problem story; sometimes called the police novel, because it now consists chiefly of rather unjust depreciation of the police. I see that Father Ronald Knox has written a most interesting introduction to a collection of tales of the kind; and Mrs. Carolyn Wells, the author of an admirable mystery called “Vicky Van, ” has reissued a study on the subject. There is one aspect of the detective story which is almost inevitably left out in considering the detective stories. That tales of this type are generally slight, sensational, and in some ways superficial, I know better than most people, for I have written them myself. If I say there is in the abstract something quite different, which may be called the Ideal Detective Story, I do not mean that I can write it. I call it the Ideal Detective Story because I cannot write it. Anyhow, I do think that such a story, while it must be sensational, need not be superficial. In theory, though not commonly in practice, it is possible to write a subtle and creative novel, of deep philosophy and delicate psychology, and yet cast it in the form of a sensational shocker.

The detective story differs from every other story in this: that the reader is only happy if he feels a fool. At the end of more philosophic works he may wish to feel a philosopher. But the former view of himself may be more wholesome – and more correct. The sharp transition from ignorance may be good for humility.

It is very largely a matter of the order in which things are mentioned, rather than of the nature of the things themselves. The essence of a mystery tale is that we are suddenly confronted with a truth which we have never suspected and yet can see to be true. There is no reason, in logic, why this truth should not be a profound and convincing one as much as a shallow and conventional one.

There is no reason why the hero who turns out to be a villain, or the villain who turns out to be a hero, should not be a study in the living subtleties and complexities of human character, on a level with the first figures in human fiction. It is only an accident of the actual origin of these police novels that the interest of the inconsistency commonly goes no further than that of a demure governess being a poisoner, or a dull and colourless clerk painting the town red by cutting throats.

There are inconsistencies in human nature of a much higher and more mysterious order, and there is really no reason why they should not be presented in the particular way that causes the shock of a detective tale. There is electric light as well as electric shocks, and even the shock may be the bolt of Jove.

It is, as I have said, very largely a matter of the mere order of events. The side of the character that cannot be connected with the crime has to be presented first; the crime has to be presented next as something in complete contrast with it; and the psychological reconciliation of the two must come after that, in the place where the common or garden detective explains that he was led to the truth by the stump of a cigar left on the lawn or the spot of red ink on the blotting-pad in the boudoir. But there is nothing in the nature of things to prevent the explanation, when it does come, being as convincing to a psychologist as the other is to a policeman.

In any case, broadly speaking, we follow the careers of Tess of the D’Urbervilles and Diana of the Crossways until we admit that those characters have committed those crimes. There is no sort of reason why the story should not be told in the reverse order; in an order in which those crimes should first appear utterly inconsistent with those characters, and be made consistent by a description that should come at the end like a revelation. Somebody else might first be suspected of betraying the secret or slaying the man.

I suppose nothing would have turned Hardy aside from hounding Tess to the gallows, though it might have been some gloomy comfort to him to have hanged somebody who had not murdered anybody. But many of Meredith’s characters might have betrayed a secret. Only it seems possible that they might have told the secret in such an ingenious style of wit that it remained a secret after all. I know that there has been of late a rather mysterious neglect of Meredith, to balance what seems to me (I dare to confess) the rather exaggerated cult of Hardy. But, anyhow, there are older and more obvious examples than either of these two novelists.

There is Shakespeare, for instance: he has created two or three extremely amiable and sympathetic murderers. Only we can watch their amiability slowly and gently merging into murder. Othello is an affectionate husband who assassinates his wife out of sheer affection, so to speak. But as we know the story from the first, we can see the connection and accept the contradiction. But suppose the story opened with Desdemona found dead, Iago or Cassio suspected, and Othello the very last person likely to be suspected. In that case, “Othello” would be a detective story. But it might be a true detective story; that is, one consistent with the true character of the hero when he finally tells the truth.

Hamlet, again, is a most lovable and even peaceable person as a rule, and we pardon the nervous and slightly irritable gesture which happens to have the result of sticking an old fool like a pig behind a curtain. But suppose the curtain rises on the corpse of Polonius, and Rosencrantz and Guildenstern discuss the suspicion that has immediately fallen on the First Player, an immoral actor accustomed to killing people on the stage; while Horatio or some shrewd character suspects another crime of Claudius or the reckless and unscrupulous Laertes. Then “Hamlet” would be a shocker, and the guilt of Hamlet would be a shock. But it might be a shock of truth, and it is not only sex novels that are shocking. These Shakespearean characters would be none the less coherent and all of a piece because we brought the opposite ends of the character together and tied them into a knot. The story of Othello might be published with a lurid wrapper as “The Pillow Murder Case.” But it might still be the same case; a serious case and a convincing case. The death of Polonius might appear on the bookstalls as “The Vanishing Rat Mystery,” and be in form like an ordinary detective story. Yet it might be The Ideal Detective Story.

Nor need there be anything vulgar in the violent and abrupt transition that is the essential of such a tale. The inconsistencies of human nature are indeed terrible and heart-shaking things, to be named with the same note of crisis as the hour of death and the Day of Judgment. They are not all fine shades, but some of them very fearful shadows, made by the primal contrast of darkness and light. Both the crimes and the confessions can be as catastrophic as lightning. Indeed, The Ideal Detective Story might do some good if it brought men back to understand that the world is not all curves, but that there are some things that are as jagged as the lightning-flash or as straight as the sword.

From the Illustrated London News October 25, 1930; reprinted in Generally Speaking and The Soul of Wit. For more on Chesterton and Shakespeare, read the Chesterton University lecture. 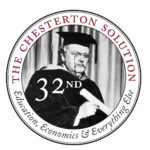 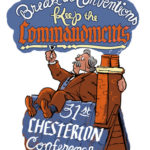 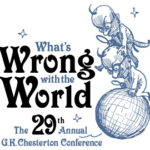 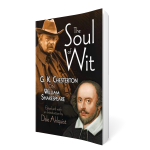 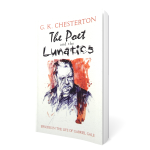