Lecture 107: “God Himself will not help us to ignore evil, but only to defy and to defeat it.” - Society of Gilbert Keith Chesterton Skip to content

Lecture 107: “God Himself will not help us to ignore evil, but only to defy and to defeat it.”

Chesterton's Writings on the Subjects of War and Peace

Chesterton on War and Peace

There are some historians, along with the usual non-historians, who, from their enlightened perspective of looking backwards, proclaim that World War I was unnecessary. Well, I suppose we could argue that all war is unnecessary, that whatever unpleasantry it was that led to belligerence could have been dealt with more positively some other way. As that well-known philosopher and humanitarian Rodney King said, “Why can’t we all just get along?” Yeah, good question. Here’s one answer: it was the other guy’s fault. Now, let the argument begin. In the case of the Great War, G.K. Chesterton argues without ambiguity that it was Germany’s fault, and that England and her allies had to fight. Germany, he warns, represented not just a political threat, but a philosophical threat that would destroy Europe.

Similar to what Frank Sheed did in assembling Chesterton’s essays from the New Witness and G.K.’s Weekly for the book, The End of the Armistice, Michael Perry takes essays from the Illustrated London News and shows how before, during, and after World War I, Chesterton was battling the German ideas that would lead to Nazism and World War II. Although these essays are already available in the Collected Works, the great advantage of this book is how the editor has selected them and laid them out with brilliant commentary, footnotes, and supporting material that provide a course on the First World War more complete than one would find in any classroom. No one can read these essays and not conclude that Chesterton’s prophetic thunderings about Germany are painfully and tragically correct.  His analysis of the Prussian threat exactly describes Nazi Germany a generation later. They are interchangeable.

It is important to note that Chesterton, who does a thorough job of demolishing pacifism, is at pains to point out that he does not “revel in human carnage and drink hot blood.” In fact, he first makes the case against war better than any pacifist:

War, especially modern war, with its huge scientific engines and huge conscript armies. . .  is merciless, it is mechanical; it uses or destroys man and nature for its own purpose. It is anti-domestic like a press-gang, and often secretive like a conspiracy. It makes things depend on small rings of statesmen and diplomatists, often corrupt and always cynical. It has aspects nobody can be proud of, such as the institution of spies. It necessarily interferes with that fundamental carelessness which is akin to kindness and is the wisest of the customs of mankind. It gives the mere scientific expert a more dangerous power than he has in any other department even of the modern world. Also it kills people.

And yet there are wars fought for a just cause, and he believes it is right to fight them and to endure them, and wrong not to fight them. He compares war to the sword, “that terrible piece of cutlery,” at once noble and unnatural, that we must be ready to pick up and also ready to fling away. Though he defends taking up arms, he desires peace. But he points out that peace is accomplished not through politics and not through war, but through “a common religion.” That common religion has been lost in Europe.

Chesterton is always battling bad ideas. Sometimes the battle requires taking up arms against a nation that has been swallowed up by a bad philosophy and has gone on the march. Prussianism is an ideology based on “scientific” racial superiority, on the “feeble doctrine that might is right,” and the academic madness that has come from the continual degradation of philosophy and finally epitomized by the lunatic Nietzsche. Chesterton says it did not spring up suddenly; the “military religion of Berlin” goes back to the atheism of Frederick the Great. And although he rails against this militarism, he says that what is the matter with the Prussian is not militarism, “but tyranny and treachery and a thirst for the things of death.”

He has to remind England of the history it has neglected, and that the Prussian mentality is “something as exceptional in Christian history as cannibalism.” He calls it a new and false religion, even “a religion of irreligion . . . for its idol is race and its sacrifice is slaughter.”

The book takes us through the entire war and its aftermath. In 1916, the midpoint of the conflict, Chesterton is encouraging a very discouraged nation not to give up. And in 1917, he says it is “the final criticism of Germany” when America, that had tried so hard to remain neutral for the first half of the war, could no longer be neutral. But Chesterton himself would realize the meaning of sacrifice, as he lost his brother Cecil in the war. He would also realize that even when the war was over, it was not over. For all the same reasons, Europe was still in peril.

Editor Michael Perry makes the intriguing case that Chesterton should have won the Nobel Peace Prize in 1933. Instead the prize went to Norman Angell, founder of modern pacifism. Angell turned out to be wrong about almost everything as the world sat by and watched the growth of Nazi Germany, whereas Chesterton correctly warned against nearly everything that would happen in Europe. Perry says it is no exaggeration to call G.K. Chesterton “Hitler’s first foe.”

Chesterton’s Illustrated London News essays can be found in Volumes 27-37 of The Collected Works of G.K. Chesterton. 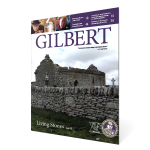