Essays from The Illustrated London News, 1935-1936 (the final columns)

It was at about the time of the first Midwest Chesterton Conference in 1981, which kicked off the great annual conference we still enjoy today, that the beloved Frank Petta of Elgin, Illinois, first floated the idea of packaging all of Chesterton’s columns from the Illustrated London News and bringing them out in book form. He knew it would be a big task: collecting almost 1600 essays written over a period of 31 years. Fortunately, Frank already had copies of every one of them. The ad hoc group of Midwest Chestertonians soon announced their plans to publish the collection. They wanted to have a scholar provide some annotations for the essays, and they found Lawrence Clipper, an English professor from Indiana University, who got the University to give him a grant not only to do the research and writing, but to have a bevy of secretaries type up all the essays. Then, along came Father Joseph Fessio of Ignatius Press in San Francisco. He liked Chesterton. He had the grand idea to publish The Collected Works of G.K. Chesterton. Enter George Marlin from New York, who became the General Editor of the Collected Works, and thought that including the Illustrated London News with the Collected Works and releasing them right away would be a great idea, because after all, Chesterton fans everywhere would be clamoring for all this previously uncollected material. The first nine volumes of the “ILN” columns came out in short order, from 1987 to 1991. Only two remained to be published. There was only one problem. There were hardly any “Chesterton fans everywhere” in 1991. John Peterson and I were about the only ones who bought the volumes. The rest languished on shelves in Ignatius’ warehouse. There was still a lot of work to be done on the Chesterton revival. But that work was done, thank God. However, it would be 20 years before Ignatius finally brought out the last two volumes, completing the ILN collection. Both Frank Petta and Larry Clipper went to their graves without seeing the project finished. However, they saw the first fruits of their efforts, and I am very grateful for that.

Volume 37 of the Collected Works is the slimmest of the ILN books, as it only contains the last year-and-a-half worth of Chesterton’s columns. However, its added value is a large subject index for the entire ILN collection, which was one of the things that Larry Clipper had worked hardest on. It is, of course, not only a valuable tool for any Chesterton scholar but for anyone to better enjoy the wealth of material from the whole collection. It sure would have been fun to have had this index twenty years ago.

It is poignant to read the final ILN volume, knowing its own long history, but especially knowing that in the last several essays, Chesterton is writing his last words. One gets the feeling that Chesterton knows it, too. He is saying good-bye.

What are his final thoughts for us?

He is prophetic as he always has been. He is concerned about the destruction of the family, which has come about through divorce and wage slavery, which have pulled both father and mother out of the home. But “nobody has really discussed the alternative to the Family. The only obvious alternative is the State. . . If families will not be responsible for their own children, then officials will be responsible for other people’s children.” The result will be that the government will gain great power over our lives, as well as interference in our lives. The most sobering prophecy: “The frightful punishment of mere sex emancipation is not anarchy but bureaucracy.” Think of the enforced chaos that has come about as the State has redefined marriage and family.

Chesterton worries about “the madness of machinery,” and warns about a robotic world “where some horrible parody of human beings pretend to be human.” This is all due to the loss of tradition, the loss of custom, the literal loss of significance, of meaning. Everything is out of proportion, reflected in the world of art where “even the grotesque effects of deformity are lost in a complete loss of form.” Along with this is the decline in the art of controversy, where men will “make a point merely because it is part of a controversy; without worrying about whether it is a part of a philosophy.”

He sympathizes with the revolutionary idealist “who would defy and destroy all our corrupt compromises,” but he has no sympathy for the man who only uses his arguments to show “his superiority to anybody he happens to dislike.” Most argument is opportunism. Even the right morality is preached for the wrong motives. The result is “a chaos of caprice and anarchy” that threatens “to produce a world in which men differ too much even to dispute.”

In Chesterton’s parting wisdom to us, we can hear a weariness in his voice. But he has not given up. He still has time for literary criticism, as he devotes one essay to admitting that he has never understood what Shakespeare’s poem “The Phoenix and the Turtle” is supposed to mean. And his second-to-last essay is a grand tribute to his life-long friend Edmund Clerihew Bentley, who has just published a sequel to his famous detective novel Trent’s Last Case. When Chesterton refers to the seeming irrelevancies in the plot that turn out to be not quite so irrelevant as we had supposed, I could not help but think of the detective novel that God has written for each of us, the story of our own lives, where we think we are misled by many irrelevant things that turn out to be very relevant after all, all leading to a surprise ending. Chesterton, who made a life of seeing the meaning in everything, could look back to “those distant days” of his youth, when he dedicated The Man Who was Thursday to Bentley. He could see that in spite of that novel’s “melodramatic moonshine,” he had the right notion of fighting against what appeared to be a world of anarchy and to resist the temptation to despair. And thus he finishes in the light of hope.

Volume 37 of The Collected Works of G.K. Chesterton is available for purchase here. 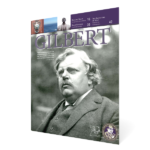