In his third year on the paper, he was still engaging his readers with surprising twists on familiar subjects and defying most of the trends that were being accelerated and celebrated everywhere else. He defends patriotism but criticizes imperialism (which meant opposing the Boer War), defends the preservation of rural life against the creeping urban life, and defends liberalism while criticizing liberals. He sees a coming loss of freedom and coming loss of character. Not yet 30 years old, he is already a master essayist, writing “short articles on huge subjects.” He writes, he says, “with one great hope, that of arousing controversy.” In early 1903, he takes the greatest risk of his still new vocation as a writer, and springs the biggest surprise yet on his readers, one that would change the course of his career. He dares to talk about religion. “Religious liberty means (apparently) that no one is allowed to speak of important matters at all.  All that our modern tolerance has done is to put the saint in the same dungeon with the heresiarch.  Then we talk about the weather, and call it the absolute liberation of all the creeds.”

What are the essentials of a great religion? Chesterton tells us forthrightly. It is “decisive” and “paradoxical.” It covers “the whole of life” and speaks “as if from outside it.” Above all, it has “the two supreme and indispensable marks of a great religion; firstly, it [is] regarded by most people as funny, and secondly it really [is] funny.” A great religion “must have forms, festivals, music, and arrogance, like the Roman Church or the Salvation Army. . . must, if it [is] to have faith, learn to play the fool.”  It is absurd to say that a man is “ready to toil or die for his convictions when he [is] not even ready to wear a wreath round his head for it.”

Not only has no one expected him to write about religion in a secular newspaper, he writes about religion in a way no one expects. Not surprising then, that he says religion must be paradoxical. Chesterton was already becoming famous for his paradoxes, and many of his readers and admirers assumed that he was being merely paradoxical by defending religion in general and Christianity in particular. But the jovial Chesterton was quite serious even if he was quite funny. “All paradoxers,” he writes, “if they be also honest men, are aiming joyfully at their own destruction. We have paradoxes, and it is our effort, day and night, to turn them into truisms.” What he is striving to achieve is not the paradox, but the platitude. “Every man who is fighting for his own beliefs is fighting to take it away from himself.  He may be clever in dull places and important in mean places; but in the land that he desires he will be nothing—a reed with the reeds in the river.” A truism is a popular truth, a paradox an unpopular one. But they are both true.

G.K. Chesterton had already been getting a lot of attention for his Daily News essays—the sales of the Daily News would spike every Saturday when his weekly column would appear—but now he was really getting attention. He especially got the attention of the editor of the Socialist daily, The Clarion, Robert Blatchford, who happened to be an outspoken atheist. Blatchford engaged the young upstart in a debate, and their controversy was conducted in a different paper called the Commonwealth. But it spilled over into several Daily News essays. To Blatchford’s challenge that there is no evidence for the divine, Chesterton counters that the problem rather is an abundance of evidence, and both the detective in human affairs and divine affairs nearly goes mad having to sift through it all.

As for religion being driven by mere superstition, Chesterton says the same could be true of the stock market. Supposing there were a society that had stock exchange and no commerce and no paper money. The skeptic from that world would mock the men of our time who “speculated so much about the Unknown and the Unknowable that they actually bought and sold invisible things—things that they could not see or handle,” men who seemed to believe “that they had bags of gold or bales of wool in their hands, whereas to the rational eye their hands were entirely empty.” Or take the case of community that did not care about physical science. To them the scientific research of the 19th century would appear to be nothing but superstition. “They would learn, for instance, that brave men went out in ships and died in the agonies of frost in order to find a place called the North Pole, in which nobody could possible live, and which was of no conceivable use to anybody, except that it was the meeting point of a number of lines that had no existence at all.” The public enjoyed the repartee.

Although Blatchford was mostly courteous in his verbal duel with Chesterton, and may have been the model for the atheist Turnbull in The Ball and the Cross, he did brag that he was going to smash the young Chesterton to “black smithereens.” Chesterton gently warned him about acting as his own umpire in the controversy, that it would be up to others to decide who would be the victor. Chesterton’s arguments can still be relished in these Daily News reprints. Without them, Robert Blatchford would be entirely forgotten.

This essay first appeared in the May/June 2015 issue of Gilbert! magazine. 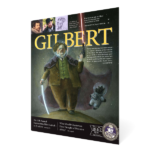