Reading this beautiful and bountiful volume of G.K. Chesterton’s Daily News essays gives one a sort of reverse sense of déjà vu. There are passages here that we are certain we have seen before, but it turns out that the more familiar versions of them came later. Chesterton is here developing his arguments that will appear in book form in another year or two or three or twenty. He is anticipating himself.

You will recall the beginning of Orthodoxy, where he describes the romance of the yachtsman who sets off to discover a foreign land, but gets turned around and lands back in England thinking it is a place he has never been before, that glorious experience of wonder and welcome, of strangeness and familiarity. A year before that book was written, Chesterton says in his Daily News column, “The whole object of travel is not to set foot on foreign lands; it is at last to set foot on one’s own country as a foreign land.”

So, too, here is a passage that will sound the same but different to anyone who has read Orthodoxy:

This is from a 1906 essay called “Vox Populi,” which even ends with the phrase “the democracy of the dead.” That phrase, of course, appears in “The Ethics of Elfland,” which is Chesterton’s great defense of fairy tales as the popular vehicles that convey timeless truths. He combines these two ideas of tradition and fairy tales in back-to-back Daily News essays. Fairy tales represent “the great, healthy, permanent human tradition.”

The essence of fairyland is this; that it is a country of which we do not know the laws. This is also a peculiarity of the universe in which we live. We do not know anything about the laws of nature; we do not even know whether they are laws. All that we can do is to take first by faith (from our parents, aunts, and nurses), and afterwards by very meagre experiment (during the miserably insufficient period of three score years and ten), the general proposition that there is some sort of strange connection, often repeated but still unexplained, between lighted gunpowder and a loud bang. And it is here that we may see the deep and sound philosophy of the fairy tale. The chemist says: “Mix these three substances, and the bang will follow.” The good wizard in the fairy tale says: “Eat these three apples and the giant’s head will fall off.” But the chemist talks in a particular tone and style, which suggests that there is in abstract philosophy some sort of inevitable connection between the three substances and the bang. Sometimes he calls it a law, which means a thing that can be broken. But he always means that the mind sees a connection between the two things—as the mind sees a connection between four and eight—and the mind does nothing of the sort. The fairy tale method is far more philosophical. The wizard says: “Do this one extraordinary thing and that other totally different extraordinary thing does continually follow. I don’t know why it does; I don’t even know that it will always do it. But it is a tip worth knowing when you want to kill a giant.” We do not know that these natural repetitions all round us are laws; we do not know that they are necessities. What we do know about them is that they are magic spells—that is, conditions which exist, but the nature of which is mystical altogether. Water is bewitched, so that it always goes downhill. Birds are bewitched, so that they fly. The sun is bewitched, so that it shines.

In a 1907 essay, Chesterton anticipates a famous passage from What’s Wrong with the World that was still three years away:

This essay first appeared in the September/October 2015 issue of Gilbert! magazine. 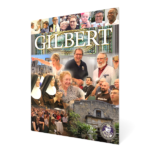