Lecture 116: The General of Generalization - Society of Gilbert Keith Chesterton Skip to content

Lecture 116: The General of Generalization

We have grown too subtle to see things at all; we can only see parts of things. And most of our modern intellectualism only increases the evil, because it does not in any sense assist simplicity. For our disease most modern analysis is bad, because it is analysis. It is cutting things up when what we need most is to put them together.

The most sensational crime of 1908, and considered the most sensational crime of the century for at least a few more years until the 20th century collected some more crimes, was when young multi-millionaire Henry Kendall Thaw gunned down the renown architect Stanford White, who was having an affair with Evelyn Nesbit, who was married to Thaw. The public affair required a public murder, but Thaw avoided the compulsory punishment—the electric chair—by copping an insanity plea. G.K. Chesterton, who wrote for newspapers and yet somehow managed to avoid mentioning the news, departed from his standard practice in one of his Daily News columns at this time. He brought up the Thaw-White case as an illustration of the insanity of the insanity plea: “First you have a frantically silly law that a man who kills another man (on whatever moral provocation) must be killed. Then when one man kills another under obvious moral provocation you say he is not a man at all, but an idiot who cannot help killing people. Then you let the idiot out to kill as many people as he likes.”

In another essay, he takes on Mary Baker Eddy and the mad fad of Christian Science: “I can imagine nothing more dangerous than to be Mrs. Eddy’s follower, except, indeed, to be her leader.”

But for the most part, this batch of essays is filled with the universal Chesterton, timeless and fresh, untainted and undaunted by the current headlines. These glory days are coming to an end, however, as both local and world events will lay their burden on him in the next few years.

Written during the time that two of his most popular books were published (The Man Who Was Thursday and Orthodoxy), these essays reveal the Prince of Paradox truly in top form. He, of course, protests that title. Though he is accused of turning everything around, he is only making observations of how turned around everything in our world is. We treat work as play and treat play as work. Politics is not taken seriously but sports are. Work is supposed to be a labor, but instead play has become a labor, filled with regimental training and the bursting of veins. We insist on analyzing everything, taking it apart, when everything is already falling apart and needs to be put back together.

We rely on machines, and so put our trust in science. But the one lesson that science really can teach us is one we have not learned. “The one important truth in mechanics is this: that the most idealistic work is the most practical work.” The man who makes wheels for your car, after all, has to make them as ideally and perfectly round as he can. “He would be a fool if he sat down in the middle of the road and cried because they never could be perfectly round in the sight of God. But he would be much more of a fool if he did not aim at exquisite mathematical roundness. He would be much more of a fool if he put the car on top of four shapeless shapes called in Euclid irregular polygons, and in popular language smashed window frames, and if he expected to win a race with a machine so constructed.” If he said that he was not an idealist or theorist, that he was not going to waste his time doing abstract calculations, but nonetheless, he was going to win the race, we would not share his confidence. So we are wrong when we say that ideals are not practical.

On an ironically related note, there is another thing we get wrong. Death. That is, we try to ignore it, even to the point of avoiding the pain that others go through who have to deal the death of their loved ones. We simply try to smooth it over. But Chesterton says, “The one way to make bereavement tolerable is to make it important. To gather your friends, to have a gloomy festival, to talk, to cry, to praise the dead—all that does change the atmosphere, and carry human nature over the open grave. The nameless torture is to try and treat it as something private and casual, as our elegant stoics do. That is at once pride and pain and hypocrisy. The only way to make less of death is to make more of it.”

It is like saying “most people are tall.” Obviously, “tall” can only mean taller than most people. “It is absurd,” says Chesterton, “to denounce the majority of mankind as below the average of mankind.”

Because we do not know how to generalize, we do not know how to argue. Chesterton, the Count of Controversialists, shows us how. We not only have to get the truth right, but we have to get the proportions right. Most arguments, he points out, “are not about what is true, but about what is important, if true. Sanity does not consist in seeing things; madmen see things more clearly than other people. Sanity consists in seeing the big things big and the small things small.”

This essay first appeared in the November/December 2015 issue of Gilbert! magazine. 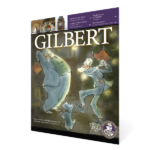