Introductions to Poetry, Plays, and Novels

GKC as MC IV: Introductions to Poetry, Plays and Novels

G.K. Chesterton said that publishers do not deny that they are publishers except when there are poets lurking about. But publishers were willing to publish even unpublished poets if they could get G.K. Chesterton to write an introduction to their work. One of the young poets he did this for was Darrell Figgis, who broke into print in 1909 with a volume of poems called A Vision of Life. Figgis was a fascinating character. A close companion of Irish revolutionary Michael Collins, he always carried a copy of The Man Who Was Thursday. Tragically, he lost his life, and his vision of life, not at the hands of English enemies but at his own hands.

The introduction to Figgis’ first book would be one of the centerpieces of Chesterton’s uncollected prefaces treating works of literature. The authors he deals with fall into three groups: Classics, such as Burns, Carlyle, Thackeray, Dickens, Gorky, and the immortal unknown poet who composed the Song of Roland; Middling writers and poets of some note, including Theodore Maynard, Saki, and Leonard Merrick; and people you’ve never heard of, such as G. Laurence Groom, Sybil Bristowe, Philip Macer-Wright, L. J. McQuilland, Vivienne Dayrell, and Ferdynand Goetel.

We should also mention E.W. Fordham, whom you may not know, unless you know that he was a member of the Junior Debating Club, and a life-long friend of Chesterton’s. His Songs of the Specials refers to the fact that he was a Special Constable. Chesterton, who was elected against his will to be the Parish Constable of Beaconsfield says he is writing the introduction only because it represents some sort of symmetry. However, “Symmetry, save in the spherical sense, is hardly my strongpoint.”

And there is Douglas Ainslee, for whose Chosen Poems GKC contributed an introduction. Significant probably for only one reason. The book was published by Leonard and Virginia Woolf at The Hogarth Press, the only pairing on record of G.K. Chesterton and Virginia Woolf.

In his dazzling piece on the great Scottish poet Burns, Chesterton writes: “Puritanism is a disguise that did not really fit the Scottish temperament; and that fact, when once understood, explains a large number of curious facts in Scottish history; and not least the rather intoxicated idolatry that has surrounded Robert Burns.” It was some sort of “queer historical accident” that Puritanism happened to linger on obstinately in Scotland. “Although it was obstinate, and in that sense rooted it was never quite native. No Scottish Puritan could possibly have been the Scottish Poet.” The paradox is that “an unconventional Scotsman has become the hero of conventional Scotsmen.”

In reference to Thackeray, renown for his masterpiece Vanity Fair, Chesterton reflectively asks:

“Which of us has his wish in this world, or, having it, is satisfied?”

Saki, the pen name for H.H. Munro, had passed away by the time his final collection of short stories appeared, but there was a particular reason why Chesterton had been asked to write the introduction. The title story “The Toys of Peace” was actually based on a rather flippant suggestion once made by Chesterton that pacifists would give children little tin figures of politicians to play with instead of soldiers.

While he wrote several introductions to help boost the budding careers of young writers, in the case of Leonard Merrick, he was brought in to help revive the career of flagging writer. A publisher re-issued all of Merrick’s novels with introductions by major authors, and Chesterton was asked to do The House of Lynch. Most of his novels were light comedy, but The House of Lynch was a more serious affair, tinged with tragedy, and, well, even Chesterton couldn’t breathe life into the corpse.

Speaking of corpses, in his intro to A Century of Detective Stories, Chesterton explains that authors of detective fiction are divided into two types: cut-throats and poisoners:

The cutthroats among us are those who, realizing that the murder story must cut short the life, decide also to cut the story short. It is their pride as artists to deal in daggers; and startle the unfortunate reader with the stab of the short story. Those in our little guild, however who prefer to live the more learned and laborious life of a poisoner, are those authors who prolong the agony of anticipation or bewilderment in the reader through a long series of chapters, leaving the reader writhing on a sick-bed of baffled curiosity, as it were for weeks on end.

He pays obligatory homage to Sherlock Holmes, but saves his greatest tribute for Dupin, the creation of Edgar Allen Poe, who introduced the first detective story, “The Purloined Letter,” which Chesterton calls “a perfect artistic unity.”

This collection would also include plays, such as Christiana and Her Children, based on an episode from Bunyan’s Pilgrim’s Progress, a Polish play The Un-Divine Comedy, by Zygmunt Krasinski, and The Betrayal, a Passion drama covering the two trials of Christ, by Father Geoffrey Dowsett. Of the last, Chesterton writes: “Men had to tear up their own scrolls and scriptures, and break the stone tables of their own tribal laws, before they could reach the supreme and mystical blasphemy of the murder of their own Maker. That drama has remained the most dramatic thing in all the history of humanity.”

There is also a book of drama reviews by J. T. Grein: The New World of the Theatre 1923-1924. Surprisingly, this essay, on one of the most forgettable books of the bunch, provides some of the most searing insights not only into theater, but art, even science, and all the fleeting fashionable philosophies that spill on and off the stage. “There is not any subject about which a modern writer may not write a play, especially if it is a bad play.”

But let us conclude not with something ephemeral but something eternal. The Song of Roland is clearly a work after Chesterton’s own heart, a story of a battle against all odds that seems to end in defeat, but does not really end because the war against the barbarians is never ended. It is the ongoing battle that “defends the sanity of the world against all the stark anarchies and rending negations which rage against it forever.”

This essay first appeared in the July/August 2017 issue of Gilbert! magazine. 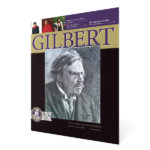