Introductions to Books about Religion, Philosophy, and Society

GKC as MC V: Introductions to Books about Religion, Philosophy, and Society

Our fifth and final collection of Chesterton’s introductions is perhaps the most fascinating of all, dealing with religion, which means dealing with both God and Man. Though the categories of necessity overlap, the first section would include prefaces to such books as Modernism and the Christian Church by Francis Woodlock, S. J., Cosmology: A Cross-section by Daniel C. O’Grady, The Mustard Tree. An Argument on Behalf of the Godhead of Christ by O.R. Vassall-Phillips, Hinduism: the World-Ideal by Harendranath Maitra, and God and Intelligence by none other than Fulton J. Sheen. Section Two would include Post-Industrialism by A. J. Penty, The Catholic Land Movement by Father Vincent McNabb and Commander Herbert Shove, The English Agricultural Labourer by Rev. A.H. Baverstock, Liberty and Property: An Introduction to Distributism by H.E. Humphries, The Change: Essays on the Land by G.C. Heseltine, Practical Pacifism and Its Adversaries by Severin Nordentoft, and Child Mediums by Irene Hernaman.

The first thing that Chesterton points out about modernism is that it is no longer even modern. “It has passed into the more dangerous phase in which it has a hold not as a fashion but as a prejudice. When a doubt or fear or abnormal notion of any sort is really new, a few hunters of novelty may run after it, but the great mass of the people, living by religion and tradition… instinctively feel it to be alien and perverse. A much more serious war must be waged against it when it is already old enough to have a sort of tradition of its own.” As usual, Chesterton is right again. We have continued to see since his time how abnormal ideas become conventions. They are naturally rejected by normal people who are simply trying to go about their business serving God, raising their families, and helping their neighbors. But they are enthusiastically embraced by rootless people who love novelty because it is new and hate tradition because it is old. The abnormal thing is soon defended as normal, and then as necessary, and then as required. It becomes not only a convention, says Chesterton, but an assumption. I don’t have to give any examples. You know what they are. And you know how fruitless and frustrating it is to attempt any reasonable argument against them. “Modernism is the enemy of many things, but the thing of which it always seems to me the mortal enemy is liberty.”  There doesn’t seem to any thinking involved in modern thought. “The only thing we know for certain about modern thought is that it must very soon cease to be modern; though some of us have been irritated into adding that it will cease to be modern before it has begun to be thought.”

This is the volume that would contain one of Chesterton’s most famous uncollected pieces: his introduction to Fulton Sheen’s first book. The full title of the books is God and Intelligence in Modern Philosophy. A Critical Study in the Light of the Philosophy of Saint Thomas. By Fulton J. Sheen

GKC leads it off by saying, “In this book, as in the modern world generally, the Catholic Church comes forward as the one and only real champion of Reason.” Interestingly, it was written in 1925, the same year as The Everlasting Man.

For Chesterton, western philosophy is epitomized by St. Thomas Aquinas, eastern philosophy by Buddha. Though he admits he does not understand India—he says, “We have come and we have conquered: but we have not seen”—he does understand that many in the west who are rejecting Christianity tend to drift to the only real alternative: Buddhism. This is where the notion comes from that everything can be better appreciated if it is all lumped together: “that anybody has proved his claim to superior intellect so long as he says that men are the same as women, or animals are the same as men, or vegetables are the same as animals, or anything the same as anything else.” If this is not a fair representation of Buddhism, it is still an accurate assessment of Easternized Western Thought.

In contrast, in Cosmology, another book defending Thomism against modern (lack of) thought that would melt everything into slush, Chesterton says that Thomism maintains that, “as there is a manifest principle of differentiation in the world, that difference goes down to the very roots of the world.”

We must begin all true thinking with the deepest of all differences; the difference between Yes and No. There are essential mental operations which do not consist of assimilating one thing to another, but of distinguishing between one thing and another; and even recognizing that one thing can contradict another. Starting from this principle of Dualism, St. Thomas Aquinas and his school developed out of the old primer of Aristotle an admirably balanced, reasonable and workable theory of human life.

The “workable theory of human life” includes, of course, the everyday stuff, the daily bread. One of the accepted abnormalities of modern life is the vast wage system connected to industrialism. Thus, this collection would include the books on Distributism. Though Arthur J. Penty was not a Distributist as such he and Chesterton agreed entirely about trying to restore something that has been lost in the modern anarchy, that there was a more stable social system in Europe’s past. Even if it wasn’t paradise it was more normal than the present. What Chesterton says of Penty is true of himself: “He is what so few modern people can be, he is outside the modern world, and in a sense surrounds it. He can judge it freely, not merely by comparison with a real past, but by comparison with a possible future. And, as a matter of fact, that future is becoming more and more possible. It is the present that is becoming impossible.”

Several of these books touch upon that form of culture known as agriculture. In Heseltine’s book, Chesterton writes: “Culture is not only knowing the best that has been said; it is also knowing the best that has been done; and even doing our best to do it. Literature may be half creative and half critical; but there is a sort of creation which is entirely creative and in no sense critical.” That is, the participation in creation which is growing things. Anyone who thinks that Distributism is not practical should read the books that come along with these introductions.

As for practical, one of the most surprising pieces in this collection would be Chesterton’s foreword to the book by Severin Nordentoft, the Danish doctor who invented arthroscopic surgery: Practical Pacifism. GKC is generally no ally of pacifists, but he credits Nordentoft with making a Christian case for Pacifism—this in the thick of the First World War—while taking a stand against “peace at any price.” Says Chesterton: “The final objection to what is called ‘peace at any price’ is simply that we should pay the price and not get the peace.”

There is a physical and spiritual side to everything, but sometimes the two meet violently. One of the most unusual books that Chesterton ever wrote an introduction to has to be Child Mediums. It’s not referring to a size of clothing for tots. It is about an almost unbelievable and horrific phenomenon during the rage of spiritualism, where children were actually recruited and trained to be mediums. The book acknowledges the tricksters and the frauds, but the real problem was with those who actually delved into genuine encounters with spirits. Chesterton, who had his own personal experiences with not merely spirits, but demons, says:

Spiritualism is a more or less unconscious diabolism. If it is reasonable to believe in spirits, it cannot be intrinsically unreasonable to believe in evil spirits. To refuse to entertain even the hypothesis that psychic phenomena are mostly due to evil spirits is simply to shut our eyes to one possible explanation of the whole business; and an explanation that does really explain.

This essay was first published in the September/October 2017 issue of Gilbert! magazine. 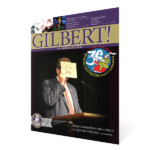