Lecture 131: Wise Beyond His Years - Society of Gilbert Keith Chesterton Skip to content

Lecture 131: Wise Beyond His Years

“The dragon is certainly the most cosmopolitan of impossibilities.”

Thus begins G.K. Chesterton’s first published essay. It is from The Debater, the publication of the Junior Debating Club, a small group of students from St. Paul’s School who would meet once every two weeks and discuss literature and whatever else was on their minds. They were sixteen years old. For the next three years, even the faculty lined up to buy their monthly paper. Chesterton’s wit and wisdom are already on display, but it is the maturity of his style that is perhaps most astonishing, as well as his amazing grasp of the material.

Consider the opening paragraph of his essay, “Poetry and Science”:

Until lately it must be admitted that the mutual relation of poetry and science has not been an altogether friendly one. Poetry, the old teacher of mankind ever since Homer sang by the seas of Hellas, or David under the cedars of Palestine, is by no means ready to give place to the new teacher, the youth of two centuries, or even to allow it an equal position; while science, on the other hand, excited with the new message which it brings to men, is strongly inclined to make a clean sweep of the older teaching, and start the world over again on a solid utilitarian basis.

He goes on to make a distinction between these two, with an almost frightening precision, showing a mind already well-formed even if not fully-formed: “The office of science is to discover the relations and origin of all the visible phenomena of the world; that of poetry is to discover the relation of visible phenomena to the invisible, the symbolism of the unseen contained in the life and tendencies of the seen.”

Along with his essays in The Debater, there is a serialized story, “The White Cockade,” and several poems, such as Adveniat Regnum Tuum.

Although Chesterton seems to have gotten along with all of his classmates, there was one student from St. Paul’s School that he apparently never cared for. But they did not attend the school at the same time. In fact, John Milton attended St. Paul’s about three centuries before G.K. Chesterton. In The Debater, he takes the first of what would be a lifetime of published swipes against the epic poet: “The least successful part of Paradise Lost is, in our opinion, the celestial part… Milton’s intellect could get as high as the Devil’s, but no higher.” I wish I could have written that in my freshmen college paper on Milton. It reflected my own sentiments exactly. Still does.

The essay on Milton was part of a series on Great English Poets, which included Alexander Pope, Edmund Spenser, Thomas Gray, William Cowper, and others. Deliberately missing from the list is William Shakespeare, whom none of the young writers—even GKC—felt capable of tackling, but he does have an entertaining essay on “Shakespeare’s Method of Opening His Plays,” where he laments the fact that most classic novels begin with a lot of boring background material before they get interesting, and modern novels try to get around this by beginning in the middle, sometimes in the middle of a sentence, before cheating us in the second chapter with a lot of boring background material. Shakespeare manages to avoid this by making his plays immediately interesting even while filling us in about what we need to know. Case in point: the opening soliloquy of Richard III. Chesterton demonstrates that he knew early on the value of a good opening line.

He shows an early taste for studied irony by calling Alexander Pope’s Essay on Criticism “a wonderful work for a man with his inexperience” and referring to The Rape of the Lock as “that light and amusing piece.”

His piece on William Cowper gives us a foretaste of that poet’s appearance in Orthodoxy as the exception that proves the rule: a poet who went mad. Here we find out why he went mad. He was a Calvinist who lived under the doom of predestination. This might be GKC’s first exposure to that philosophy he so disliked. Cowper’s bout with madness led him to attempt suicide, but he failed due to “a strange conjecture of circumstances” that inspired “the simple-minded pietist” to write the noble hymn:

God moves in a mysterious way

His wonders to perform…

But Cowper’s own last words were, “I feel unutterable despair.”

This contrasts nicely with the essay, “The Happiness of Genius.” Chesterton points out that Chaucer was happy: “one of those happy natures who contrive to take their place in the first rank of literature, without bothering their heads about the dark side of things.” Byron, on the other hand, “passed through every form of pleasure and dissipation till the day that his ashes were mingled with the dust of Greece, a most brilliant, a most luxurious, a most unhappy man.” Then he mentions the one whom they were all afraid of mentioning: “one about whom we have yet to ask, about whom we should with the greatest interest ask, about whom we should ask in vain. Veiled in absolute mystery the greatest of English poets stands before us, without biography, without character. Grief or joy, love or hatred, good or evil, we do not know which of these he experienced. We only know that he understood them all.” The mysterious Shakespeare who tells about everyone except himself.

Chesterton says that the people who read great literature are generally more cheerful than the people who write it. He admits that as a “humble but devout student of general literature,” he finds the library not “a dry or monotonous atmosphere” but “a never-failing source of real happiness and contentment.” He points out that one reason geniuses have been unhappy has been due to their vices (see Byron, above). And some have been ambitious and jealous, and they brood over their writing, and life can be disappointing. But in their defense, they often find themselves having to defend unpopular truths which can certainly lead to melancholy. Chesterton would certainly go through a period of depression in the years that followed, but he turned out to be a happy genius, in spite of having to face a world that didn’t care for the truth that he was constantly repeating.

It goes back to that first essay. He knew he had to face the dragon. And his conclusion is hopeful, profound and prophetic.

Reader, when you or I meet him, under whatever disguise, may we face him boldly, and perhaps rescue a few captives from his black cavern; may we bear a brave lance and a spotless shield through the crashing melée of life’s narrow lists, and may our wearied swords have struck fiercely on the painted crests of Imposture and Injustice when the Dark Herald comes to lead us to the pavilion of the King.

This essay was first published in the May/June 2018 issue of Gilbert! magazine. 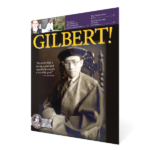