Lecture 36-Eugenics and Other Evils
Skip to content
The Society of G.K. Chesterton
Menu

Lecture 36: Eugenics and Other Evils

The Case Against a Scientifically-Designed Society

Eugenics is a nice-sounding word, combining as it does the Greek words for “good” and “birth.” And Francis Galton, who made up the word and the idea, proposed Eugenics “for the betterment of mankind.” But that’s as far as the nice-sounding stuff goes. The actual definition is rather horrible: the controlled and selective breeding of the human race. Galton based his ideas on the theories of his cousin: Charles Darwin. By the beginning of the 20th century, when Darwin’s theory was safely embraced by the scientific establishment, Eugenics was getting good press. The New York Times gave it constant and positive coverage. Luther Burbank and other scientists promoted Eugenics. George Bernard Shaw said that nothing but a Eugenic religion could save civilization.

Only one writer wrote a book against Eugenics. G.K. Chesterton. Eugenics and Other Evils may be his most prophetic book.

Eugenics led directly to the birth control movement. All the same players were involved, such as Margaret Sanger, who was a member of the American Eugenics Society and was the editor of the Birth Control Review. The primary philosophy was trumpeted on the cover of the Birth Control Review: “More Children for the Fit. Less for the Unfit.” She made it clear whom she considered unfit:. “Hebrews, Slavs, Catholics, and Negroes.” She set up her Birth Control clinics only in their neighborhoods. She openly advocated the idea that such people should apply for official permission to have babies “as immigrants have to apply for visas.”

Why don’t we hear of this connection between Margaret Sanger, the founder of Planned Parenthood, and Eugenics?

Two words: Adolf Hitler. He officially instituted Eugenics, leading an entire country in carrying out its principles, not only to breed what he believed to be a superior race but to eliminate everyone whom he considered to be inferior. Where did Hitler find early support for his Eugenic ideas? From Margaret Sanger and her circle. Eugenic Scientists from Nazi Germany wrote articles for Sanger’s Birth Control Review, and members of Sanger’s American Birth Control League visited Nazi Germany, sat in on sessions of the Supreme Eugenics Court, and returned with glowing reports of how the Sterilization Law was “weeding out the worst strains in the Germanic stock in a scientific and truly humanitarian way.”

After World War II, when the world learned of the horrors of the Holocaust and the death camps, the term Eugenics was utterly discredited. Margaret Sanger was quick to distance herself from Eugenics and began to emphasize Birth Control as supposedly a feminist issue. We don’t hear about Eugenics at all any more.

Chesterton understood this. But he understood it in 1910 (which is when he started writing this book, which was not published till 1922). As with so many other things, Chesterton saw exactly what we see. Only he saw it long before it happened.

Eugenics, like abortion, bases all its benefits on denying an entire class of humans their humanity. With eugenics it was the “unfit,” which usually meant the poor, the weak, or simply the ethnic-types who were just having too many children. With abortion, there is a perceived benefit to someone by eliminating the weakest and most defenseless of humans: the unborn. As Chesterton says with chilling accuracy: “They seek his life in order to take it away.”

Eugenics and abortion is about the tyranny of the elite deciding who shall live and who shall die. And if it’s about the elite, it’s about money. It was the Rockefellers and the Carnegies and other capitalist lords who funded eugenics research in the early 20th century. They went on to be major supporters of Planned Parenthood. Chesterton says that wealth, and the social science supported by wealth tries inhuman experiments, and when they fail, they try even more inhuman experiments. They are inhuman because they are godless. But they are godless because they don’t want to face how inhuman they are. The wealthy industrialist became agnostic, says Chesterton, “not so much because he did not know where he was, as because he wanted to forget. Many of the rich took to scepticism exactly as the poor took to drink; because it was a way out.”

Eugenics is also about the tyranny of science. Forget the tired old argument about religion persecuting science. Chesterton points out the obvious fact that in the modern world, it is the quite the other way around.

Chesterton says the problem with official science is that it steadily becomes more official while it becomes less scientific. “The man in the street,” he says, “must be wholly at the mercy of an academic priesthood.” If people who care about traditional truths attempt to object to eugenics or birth control or cloning, they are barraged with what Chesterton calls “the same stuffy science, the same bullying bureaucracy, and the same terrorism by tenth-rate professors.”

[Note: A recent edition of Eugenics and Other Evils from Inkling Books, reveals this “terrorism by tenth-rate professors.” Editor Michael Perry has added articles and excerpts from Francis Galton, from the American Eugenics Association, from the Birth Control Review and other proponents of Eugenics. The early writers reveal their atrocious ideas, the later writers recognize Chesterton’s book as an obstacle to their implementing their ideas.]

Click here to purchase a copy of Eugenics and Other Evils. 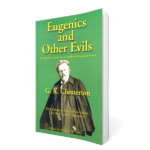