Chesterton’s Ghost-Written Book About an Explorer in New Guinea

We have now completed our survey of the books Chesterton wrote in his lifetime. Before we begin considering his posthumous books, of which there are many, we are going to back up a bit. All the way to what we could call Chesterton’s “primitive” beginning.

In 1898 Chesterton was working for the publisher Fisher Unwin. In a letter to his fiancé, Frances, he describes the many projects he is working on. One project has something to do with a certain “Captain Webster.” Who is Captain Webster? To all appearances he is a small man with the waxed moustache who lives in a hotel. “An agreeable ass,” says Chesterton. What one would not know from looking at him was that he has “had some of the most hideous and extravagant adventures that could befall a modern man.” Webster had gone to New Guinea as a naturalist collecting thousands of species, mostly butterflies and bugs and birds. In the course of his collecting,

…his yacht was surrounded by shoals of canoes full of myriads of cannibals of a race who file their teeth to look like the teeth of dogs, and hang weights in their ears till the ears hang like dogs’ ears, on the shoulder. He held his yacht at the point of the revolver and got away, leaving some of his men dead on the shore. All night long he heard the horrible noise of the banqueting gongs and saw the huge fires that told his friends were being eaten. Now he lives in the Grosvenor Hotel. Captain Webster finds the pen, not only mightier than the sword, but also much more difficult. He has written his adventures and we are to publish them and I am translating the honest captain into English grammar, a thing which appalls him much more than Papuan savages. This means going through it carefully of course and rewriting many parts of it, where relatives and dependent sentences have been lost past recovery. I went to see him, and his childlike dependence on me was quite pathetic. His general attitude was, “You see I’m such a damned fool.” And so he is. But when I compare him with the Balzacian hauteur and the preposterous posing of many of our Fleet Street decadent geniuses, I feel a movement of the blood which declares that perhaps there are worse things than War.

Thus we could argue that Through New Guinea and Cannibal Countries by Herbert Cayley-Webster was actually the first book that Chesterton wrote, even if he was only a ghost writer.

For the most part, Chesterton keeps his unique wit and wordplay away from the text. But there are a few exceptions. For instance, in addition to the thousands of species that Webster discovered, he also discovered a range of mountains that was not there. According to the map there should have been some mountains, but when standing at that particular longitude and latitude he found there were no mountains, leading to the conclusion: “as we cannot change the configuration of the earth, perhaps it may be as well to alter the map.”

It is possible that some of Chesterton’s great insights may have had their genesis in his experience of having to write Webster’s book for him. The most obvious one is: “An inconvenience is only an adventure wrongly considered. An adventure is only an inconvenience rightly considered.” Captain Webster in searching for bugs also had to endure them – in the form of malaria fevers and  bites from other little insects that left him bedridden for days. He had to cross rain-swollen rivers without the benefit of a bridge. He had to cut through jungles and sleep in makeshift grass huts. And one might argue that dealing with natives whose whimsical dietary habits sometimes included boiled explorer could be considered inconvenient if one does not have a certain adventurous attitude.

Cannibalism is a frequent and useful illustration for Chesterton throughout his writings. It is an example of something that is wrong on the face of it. There is no negotiating about political or cultural differences to excuse such an act. It has nothing to do with respecting other religions. By any standard, the cannibals were fierce and savage in their behavior. It is interesting to know that Chesterton’s references to cannibals were not merely rhetorical and abstract. He was not making any of this stuff up. He had the benefit of an eyewitness account that he had to transcribe himself.

But Chesterton also learned something about the other end of civilization while organizing Captain Webster’s thoughts. Although Webster was a gentleman and vaguely Christian, one can also understand why Chesterton considered him an agreeable ass. He represents the 19th century Victorian mentality of knowledge for knowledge’s sake, risking his life to collect butterflies, taking the flora and fauna much more seriously than the human beings, both those he encountered and those he hired as his human donkeys. People are secondary, almost a nuisance. It explains in part why G.K. Chesterton would be a prophet in the modern world, where he predicted the loss of normal things, including the loss of “the mysterious worth of man.”

This essay first appeared in the January/February 2009 issue of Gilbert! magazine. 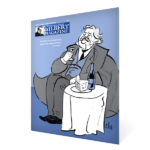