Lecture 79: A Handful of Authors

We are only now beginning to appreciate the task that faced Dorothy Collins as she attempted to deal with the mountain of uncollected Chesterton essays written for various newspapers and magazines during his long literary career. As she went about the work of deciding which essays to gather into books, she was rightfully overwhelmed. There were literally thousands of articles, and no doubt she realized that there was as much material that she did not know about as what she did know about. And what she did know about was not exactly well-organized. As she sifted through Chesterton’s writings and started setting things aside for re-publication (not knowing that in the future there would be a group of fanatics trying to hunt down every single word Chesterton wrote), one clear category began to emerge: literary criticism. Had she had the strength and resources, she could have assembled several more volumes of this genre in addition to A Handful of Authors.

But here she gives us Chesterton’s views on Mark Twain, Lewis Carroll, Victor Hugo, John Milton, William Blake, Oscar Wilde, Louisa May Alcott, Cervantes, Newman, Ibsen, Tennyson, Conan Doyle, and, as always, Shakespeare and Dickens. And while the editing is very good and unobtrusive (including some creative “composite” essays), she made one very strange editing decision, obliterating the origin of one of Chesterton’s most famous lines.

It is not obvious to most people why literary criticism is important. Chesterton might argue that for most people, the literature itself is sufficient. The problem is the educated few who need to have literature explained to them, because they have learned just enough bad philosophy to miss the point. A good story, says Chesterton, should have a point, and the main character should sit on it.

Milton represents the rise of the modern artist, the individualist who thinks for himself, but unlike Shakespeare and Dante and Dickens, does not think for other people also. Milton has never been popular, explains Chesterton, because “the tastes of the man in the street are classical.”

Other modern artists, such as Ibsen, attempt to be realistic by leaving out the romantic, which is actually the most essential reality of life. Ibsen cannot even produce tragedy, only dullness. We need both comedy and tragedy because those are the real elements of real life. When they are artistically presented they perform a great service. Chesterton says that classic farce, however violent it is, leaves the heart more happy. Classic tragedy, however heartrending it is, leaves the heart more strong.

The distinctively American wit of Mark Twain produces a laughter as large as Niagara. “Wit is a sword; it is meant to make people feel the point as well as see it. All honest people saw the point of Mark Twain’s wit. Not a few dishonest people felt it.” Oscar Wilde, on the other hand, posed as a detached wit, pretending that art was more important than morality, and yet proved by his life that morality is more important than art. It was the completeness of his life, says Chesterton, that is so awful to us: the fact that he actually paid for his sins and we have not paid for ours.

Chesterton’s literary criticism is itself literature. It is sublime writing that lifts us up higher than ourselves and manages, through graceful and precise words, to give us a view of eternity. A recurring theme in these essays is that there is a spiritual reality behind every physical reality, so that even those who do not understand the Catholic theology of the Sacrament, still can appreciate how the tangible thing is close to the spiritual: the child with a doll, the girl with an engagement ring, the soldier with a medal. Moreover, children are closer to the kingdom of heaven because they know how to enjoy something without understanding it.

Perhaps the most wonderful essay in the book is the opening piece on Robert Louis Stevenson. I have often maintained that when Chesterton hails the greatness of another author, we are struck by the sense that the very qualities he describes are qualities that we see vividly in Chesterton himself. Substitute the name “Chesterton” for “Stevenson” in the following passage, and you will see what I mean:

Stevenson is a peculiarly difficult man for any biographer to estimate fairly. The reason lies in the fact that his personality was, as it were, singularly light and slippery, and that this slipperiness and levity arose not from eccentricity, but from a swift and unconquerable common sense. We are so rooted in open and systematic morbidities, in inhuman prejudices, in respectable monomanias, that a sane man terrifies us all like a lunatic … Stevenson was peculiarly an embodiment of this elvish sanity. He is continually startling us in his letters, not because his remarks are peculiar, but because they are a little more sensible than anything we had ever thought of. He was a sincere moralist and a sincere artist, but neither the old morality of light and darkness nor the new morality of light and shade could capture or contain him. He danced beyond them all with that divine frivolity which is the best definition of faith.
It is said in some quarters that Stevenson has been overpraised, that a reaction has set in against him, that he will not fascinate the next generation. It matters not one rap whether he does or not to anyone who has perceived his absolute solidity and his eternal use to mankind. If we in this age had a little more faith in certainties and a little less dread of caprice and reaction and changes of public opinion, we should gain more credit for sense in the long run… Stevenson will win, not because he has friends or admirers or the approval of the public or the assent of the aesthetes. He will win because he is right – a word of great practical import which needs to be rediscovered. He may or may not be eclipsed for a time; it would be a truer way of putting it to say that the public may or may not be eclipsed for a time.

“A Handful of Authors” is currently out of print.
This essay first appeared in the December 2009 issue of Gilbert! magazine. 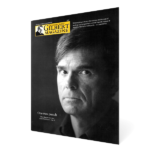