The Illustrated London News 1905-07
Volume 27 of The Collected Works of G.K. Chesterton

In 1985, when Ignatius Press announced its monumental project to publish the Collected Works of G.K. Chesterton, it should have been regarded as a major event in the history of publishing. It wasn’t. Instead, it went mostly unnoticed. Those who noticed either yawned or scratched their heads. There was great rejoicing only among a minute group of people, most of whom did not even know each other. They were the few who simply could not get enough Chesterton, who had combed the used book stores and emptied them of their GKC stock, who finally were being provided with some new material. After the early volumes, containing Chesterton’s most popular books, there finally appeared the first volume of the Illustrated London News essays, which was in effect the first new book by Chesterton in over a decade.

But the Chestertonians were still a small and scattered lot. Father Joseph Fessio, head of Ignatius Press, and George Marlin, General Editor of the Collected Works, thought there were more of them out there. Ignatius invested in nine volumes of the Illustrated London News essays, but they did not sell well. The Chesterton revival was still a few years away. It was the temporary downfall of the Collected Works project. Ironically, it was the very publication of those ILN volumes that helped spur the Chesterton revival, because they became the main source material for the Chesterton newsletters that led to Gilbert Magazine, as well as for the scripts of EWTN’s television series, The Apostle of Common Sense.

It was the great Frank Petta of happy memory who had collected all of Chesterton’s ILN essays, and it was an English professor from Indiana University who edited and annotated all 1575 (or so) of them. Larry Clipper’s achievement has never been properly acknowledged.

Some would argue that the first volume of the ILN essays is the best of the bunch. Let them argue that. In their favor there is the fact it includes the essays that gave birth to All Things Considered (“On Running After One’s Hat,” “Woman,” “Wine When It is Red,” etc.). Also in their favor is that so many of the essays in this collection had never been reprinted anywhere else. And then there is the experience of watching the beginning of Chesterton’s  historic tenure as the Our Note-Book columnist for this distinguished paper, to which he would contribute a weekly essay, with only two interruptions, for the next 31 years, right up until the week of his death. This would be Chesterton’s pulpit, providing him with a steady income and a ready audience.

In the very first essay, the man with the magic pen writes about having a spare moment (something few us ever have) to think (something few of us ever do). Yet all peasants and barbarians have such moments, “during which they made up the Iliad and the Book of Job.”

In the second essay comes one of Chesterton’s essential ideas and certainly one of his most splendid quotations, and it sat dormant for eight decades until this volume was printed: “We should always endeavor to wonder at the permanent thing, not at the mere exception. We should be startled by the sun, and not by the eclipse. We should wonder less at the earthquake, and wonder more at the earth.”

And though Chesterton was famously told he should not write about politics and religion, that is precisely what he does. Larry Clipper, in his introduction, says with great insight, “One may say that the key to understanding Chesterton on a political level is that he spent a lifetime trying to substitute one set of issues for another, to provide an alternative political agenda.”

We see Chesterton in all his glorious political incorrectness, opposing votes for women, defending drinking and smoking, mocking popular social reform, questioning the honesty of the rich, and defending giving money to beggars. “Nothing will be done until we have realized that charity is not giving rewards to the deserving, but happiness to the unhappy.” As for those Female Suffragists, Chesterton says he can accept the idea of women voting; he just cannot accept any of the reasons that the Suffragists give for women voting. He sees no reason to bring women into a system that was completely corrupt. Chesterton, the ardent defender of Democracy, is the endless critic of the current political process. The politician, he says, is always the enemy of the crowds. “His whole career has only two stages: first, as quickly as possible to represent his town; then as quickly as possible to misrepresent it.”

Just as political questions cannot be avoided, neither can religious questions: “No intellectual movements, however searching, no logical processes, however severe, can ever alter this ultimate possibility; for all such intellectual movements and logical processes bring us at last to the edge of what is called the Unknowable; and there our poetic curiosity begins.” Chesterton even starts hinting at a sacramental understanding of things: “Whenever men really believe that they can get to the spiritual, they always employ the material. When the purpose is good, it is bread and wine; when the purpose is evil, it is eye of newt and toe of frog.”

So, yes, the argument can be made that this is the best of the Illustrated London News volumes. The only obvious argument against it is all the other volumes. New volumes of the ILN have been published. More treasures await. 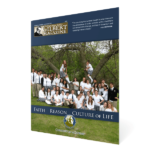