Lecture 91-The Boat on a Stormy Sea Skip to content

Lecture 91: The Boat on a Stormy Sea

The Illustrated London News 1908-10
Volume 28 of The Collected Works of G.K. Chesterton

Back in the glory days of Midwest Chesterton News in the very early 1990s, I remember John Peterson singing sweet superlatives about this volume. Naturally, I was one of the dozen or so people who then invested in a copy, and I was able to affirm that John’s opinion was spot on. It was indeed packed full of Chestertonian wit and wisdom (an alliterative phrase that is almost impossible to avoid when describing our hero). Unlike most later volumes of the Illustrated London News (aka ILN), the majority of the material in this volume had been uncollected until the Ignatius project. So those of us who didn’t have old copies of the ILN in our basements, were seeing these essays for the first time. (I have since acquired a large collection of old copies of the ILN. They are a lot of fun, too. Stop by sometime. I’ll show them to you.)

Among other things of interest, this is the volume that contains the essay that inspired Gandhi to begin leading a movement for Indian independence. (October 2, 1909, in the U.S. edition, two weeks earlier in England.)

The first essay of Volume 28 contains one of those famous Chesterton lines that bears repeating: “We men and women are all in the same boat, upon a stormy sea. We owe to each other a terrible and tragic loyalty.”

This sets the tone for everything that follows. Chesterton is writing in the opening decade of the 20th century, when most people were looking ahead with great optimism. Communication and transportation were experiencing great breakthroughs. New scientific disciplines were being developed. The great educational institutions were flourishing. New technology would provide clear sailing. But Chesterton sees rough seas ahead. As early as 1909, he sees a war coming with Germany. He is distressed that in Europe, where all countries share a fundamental heritage and should share the same basic philosophy, there is already a war of ideas, which pose a threat to Christian civilization.

He distrusts the new-fangled academic disciplines: “It is certainly a just and humane act to rescue any human beings from having sociology taught to them.” He worries that “Ethics” is replacing “Morals,” in an attempt to treat human conduct scientifically and not theologically. And “Ethics” is already turning into “ethology,” which Chesterton regards as part of “a curiously bloodless and polysyllabic style now adopted for the discussion of the most direct and intimate matters.”

Darwinism and Marxism epitomize the new authority of science and economics, but Chesterton is not impressed. Scientific and economic theories do not explain mankind. They only reveal the prejudices of the people who employ them. “When learned men begin to use their reason,” says Chesterton, “then I generally discover that haven’t got any.”

He notices subtle and not-so-subtle attacks on the family, and his defense of the family is all the more prophetic today: “Most human experience goes to show that the more a family is really a family the better it is – that is, the more it really consists of father, mother, and children.” He finds himself having to defend common things and the common man, including the idea of property as “that which is proper to man.” But there are also those things that belong to everyone. One of those things is great art. Chesterton makes a surprising argument why the great masterpieces belong to the public and not to the private rich.

He also explains the vacuity of today’s debates because people cannot argue using either reason or authority: they have “neither the courage to assert a thing nor the capacity to prove it, so [they] allude to it in a light and airy style, as if somebody else had asserted and proved it already.” Or, in other words, “referring to the very thing that is in dispute as if it were now beyond dispute. ” (Global warming, anyone?)

Chesterton demonstrates how to conduct an argument. He does it, ironically, while praising a perfectly constructed “locked room mystery” (“The Yellow Room,” by Gaston Leroux – author of “The Phantom of the Opera.”):

This world is full of truths, half-truths, probabilities, and possibilities of various orders of validity and pointing in various directions. But there are some facts which are certain in a quite special way; and if other facts contradict them, then we must inquire into the other facts; but we must not waste our time inquiring into the one fact which is certain. . . All good argument begins with the indisputable thing and then disputing everything else in light of it.

Chesterton’s loyalty to his fellow travelers is demonstrated by his willingness to argue with them. He sees their bad ideas as imperiling everyone else on board. He is constant and consistent in his defense of Christianity, morality, and liberty. They are inextricably tied together. Defending morality means defending liberty. It is the one preaching immorality who will destroy the rights of the free man. And sink the boat that all of us are in together.

This book is available in our store by clicking here now. 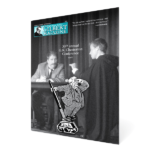