Did you know that Karl Marx’s real name was Mordecai? That Trotsky’s was Bronstein? That Voltaire’s was Arouet? That Anatole France’s was Thibault? That George Sand and George Eliot were really Mademoiselle Dudevant and Mrs. Cross? Maybe you did. But did you know that Oliver Cromwell was really Oliver Williams? One of his relatives had married a niece of a servant of Cardinal Woolsey named Thomas Cromwell, and so the whole Williams family decided to take the Cromwell name. Uncle Tom made a name for himself by not only pushing aside the Cardinal, he played a key role in persecuting the Catholics of England under Henry Tudor and helped lead the destruction of the monasteries and the confiscation of all the land and buildings owned by the Church. Oliver wanted to be publicly associated with the name, even though he still signed his own legal documents as Oliver Williams. We do not usually learn these things in our history books. But we do learn them from a G.K. Chesterton essay in the Illustrated London News from 1928.

Volume 34 of the Collected Works contains essays on other historical figures, such as Queen Elizabeth and Abraham Lincoln, and on such literary figures as Shakespeare, Sherlock Holmes, and Thackeray, but as is the case with the other volumes of ILN essays, when taken as a whole, we see Chesterton writing less about the past than about the present—our present, that is, not his.

Generally speaking, Chesterton can be very specific. He points out the implications of our transition from a rural to an urban culture, which happened not only because the countrymen went to the towns, but, what was worse, the town school teacher went to the country. He sees the ugly sameness coming, epitomized by modern urban architecture, where the fashion-makers decree to their followers that “their practical dwelling-place must not be beautiful.” He warns about our infatuation with amazing new technology (“The modern multiplication of wonder does not always lead to the increase of wonder.”) When I consider teenage zombies texting each other during movies, dinner, and while adults are trying to have conversations with them, I see that Chesterton has already considered it, but at a more profound level than I have: “No talking that can be called talking is conducted in a language in which there is no literature.”

He sees not only the loss of character, but the loss of characters, of unique and interesting and colorful individuals who have depth and dignity to them. If we want to see characters and characters again, “we are much more likely to find it in Christians who accepted the Imitation of Christ than in all these millions of materialists who are taught to imitate each other.”

In the academic realm, Chesterton sees the rise to prominence of the study of economics, but notices that “the economist does not teach economics; he teaches the economic theory of history.” Economists now claim to be scientists, and both claim to deal with fundamentals, but Chesterton reminds them that if they wish to get down to fundamentals, they must begin with the fundamental problem of evil. They must deal with sin, and “Sin, whatever else it is, is not merely the dregs of a bestial existence. . . The worst things in man are only possible in man.”

And though science cannot account for sin, Chesterton does not see a conflict between science and religion:

Science cannot contradict religion, in the sense that scientific truth cannot contradict religious truth. That is only another way of saying that truth cannot contradict truth. But sham science and false religion can contradict each other, or corroborate each other, or do anything they choose. But in so far as the fashionable phrase was always used to mean that material science, in modern times, has been directed only against dogmas, and not against moral ideals, it is utterly and hopelessly false. The really interesting thing to notice is that the materialistic philosophy drawn from science, so far as it went, was much more destructive of the most modern ideals than of the mediaeval ideals. I do not admit that any such moral can be drawn from any material facts. But in so far as there was a moral, it was entirely immoral. And in so far as it was immoral, it was specially against the most recent humanitarian morality. It was not in the same sense, and indeed it could not be, against the abstract affirmations of a supernatural system.

Ironically, technology is easy to understand. It is certainly easy to understand when it does not work. When an airplane fails, it falls. “But,” says Chesterton, “the bad social system may fail because it endures. Slavery, for instance, endured for centuries of high civilisation; and yet some of us are bold enough to say it was a bad system.” The same could be said (and will be said) for a social system that kills babies and deviates the definition of family. In such a failed system, we cannot condemn a thing as immoral because someone else is touting it as being “in advance of the age” and telling us that morals change.

Neglecting to deal with our sins will eventually destroy us. And in a world that generally denies sin, we generally neglect to deal with it. On those exceptional occasions when we do deal with it, we deal with exceptional sin. We don’t just deal with it, we dwell on it. We do not make the “obvious distinction between the general sins of men and the perverted sins of madmen.” But when horror strikes, we run to the Church for comfort. We know in our hearts that the only thing worse than the crimes, let alone confessions of crimes, is “the spiritual insolence that refuses to confess anything.”

Volume 34 of The Collected Works of G.K. Chesterton is available for purchase here. 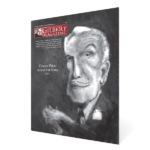