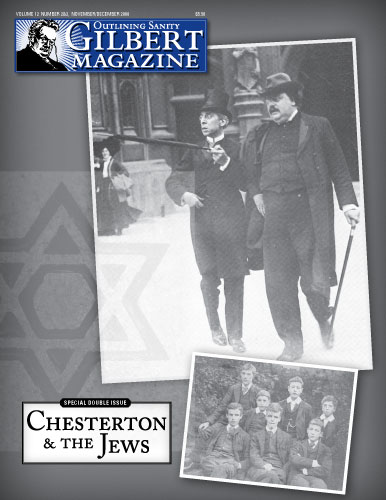 Ordering instructions: Upon completion of your order, you will be sent an email containing a one-time only hyperlink to download your purchase (accessible for 24 hours). Please note, you will be prompted to sign in to your account prior to download.

6 | EDITORIAL
Chesterton and Anti-Semitism: A Personal Reflection by Dale Ahlquist

8 | Straws in the Wind:
A Report on My Anti-Semitism by G.K. Chesterton

18 | A Miscellany of Men:
Some of His Best Friends by Dale Ahlquist

19 | The Ballad of Gilbert:
Mediaevalism

30 | The Rolling Road:
More Real Than We Can Imagine by Kevin O’Brien

32 | Tales of the Short Bow
An Accidental Death by John Peterson
No Room for the Babe by James G. Bruen Jr.

34 | The Flying Inn
The Rule of Law by David Beresford

35 | The Flying Stars
An Author Accused by Nancy Carpentier Brown

37 | Jogging with G.K.
Running From Home by Robert Moore-Jumonville

38 | The Signature of Man
Frank Brangwyn and The Daughters of Jerusalem by G.K. Chesterton

40 | The Battle with the Dragon
“Those People” by Kyro R. Lantsberger

41 | All I Survey
A Shrine Out of Time by David W. Fagerberg

45 | All is Grist
Love and Loyalty by Joe Campbell

46 | The Distributist
Distributism and the Jews by Dale Ahlquist

48 | Book Reviews
Whatever You Do, Don’t Mention the Jews reviewed by Bradley Rothstein
The Desire of the Everlasting Hills reviewed by Sean P. Dailey
Good Pope, Bad Press reviewed by Chris Chan

51 | Off the Shelf with Mike Foster
The Merchant of Venice

52 | Fear of Film
The Rosary on Celluloid by Art Livingston