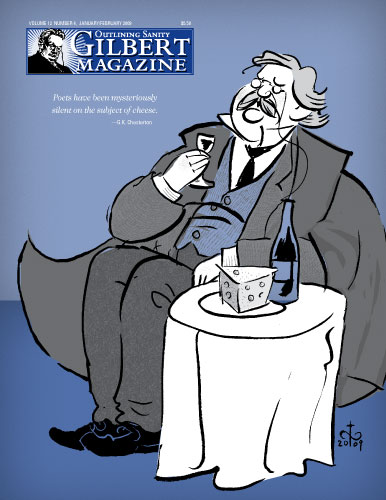 8 | Straws in the Wind
The Appetite of Earth by G.K. Chesterton

20 | Tales of the Short Bow
The Three Men Bakery by John Peterson
The Resurrection by James G. Bruen Jr.

28 | The Signature of Man
Art and the Churches by G.K. Chesterton

29 | The Battle with the Dragon
A Knot in the Stomach? The Tie That Binds! by Kyro R. Lantsberger

31 | All I Survey
Was Chesterton A Glutton? by David W. Fagerberg

36 | All is Grist
What’s For Dinner? by Joe Campbell
The Traveler by Ned Willkom

46 | The Distributist
Life in the Cubicles by Joe Walsh

44 | Off the Shelf with Mike Foster
Brighton Rock

45 | Fear of Film
Food and Food by Art Livingston