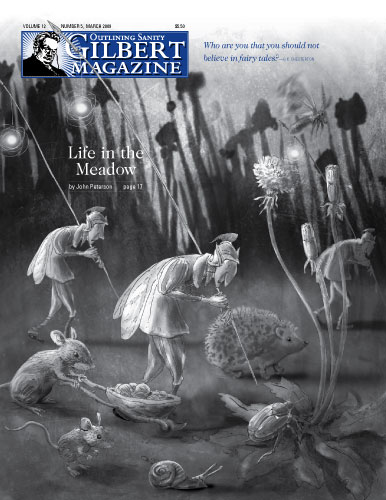 7 | EDITORIAL
Save Marriage, Save Civilization

8 | Straws in the Wind
On Bluff by G.K. Chesterton

9 | The Ballad of Gilbert
“Ballade of Amateur Mystics”

10 | Schall on Chesterton
The Mere Fact of Existence by James V. Schall, S.J.

16 | A Miscellany of Men
A Crank of Refinement, A Saint in the Rough by Nathan Allen

17 | Tales of the Short Bow
Life in the Meadow by John Peterson
The Jackass by James G. Bruen Jr.

21 | The Flying Stars
One Bad Shop by Nancy Carpentier Brown

22 | Manalive
Changing the Culture in a Chestertonian Way, Part Three by Chris Chan

23 | Jogging with G.K.
The Essential Mystery by Robert Moore-Jumonville

24 | The Signature of Man
Gothic Art by G.K. Chesterton

27 | All I Survey
A War of Words by David W. Fagerberg

32 | ALL is GRIST
Our Own Fault by Joe Campbell
Reading Fiction by James G. Bruen, Jr.
John Heath-Stubbs by Art Livingston

42 | Off the Shelf with Mike Foster
Wait Till Next Year

43 | Fear of Film
The New World reviewed by Art Livingston