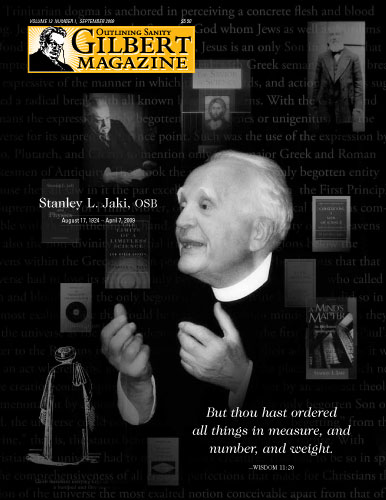 8 | Straws in the Wind
The Sentimentalist Of Science Ballade of Capital by G.K. Chesterton

13 | A Miscellany of Men
Chesterton’s Hagiographer? by Dale Ahlquist

25 | Tales of the Short Bow
The Explorer by John Peterson
Sweethearting by James G. Bruen Jr.

29 | Jogging with G.K.
On Treadmills by Robert Moore-Jumonville

36 | Off the Shelf with Mike Foster
So Finely Tuned A Universe: of Atoms, Stars, Quanta, and God

41 | The Signature of Man
Abbey’s “The Trial of Queen Catherine” by G.K. Chesterton

46 | Chesterton University
Still Fighting From the Grave By Dale Ahlquist