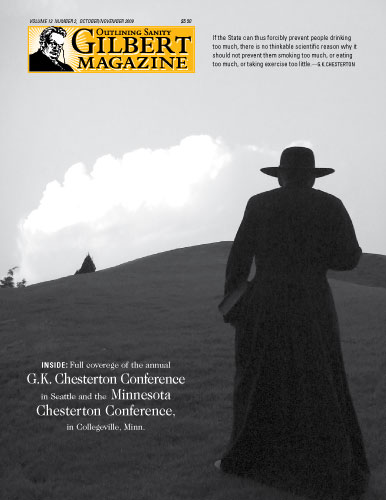 6 | Straws in the Wind
The Three Threats to Freedom

16 | The Ballad of Gilbert
Free Love by G.K. Chesterton

20 | Rolling Road
A Family Goes to Philly by Kevin O’Brien
A Commonality by Sean P. Dailey

27 | The Signature of Man
The Lost Aesthetics Of The State by G.K. Chesterton

29 | Jogging with G.K.
Barns and Noble by Robert Moore-Jumonville

30 | The Battle with the Dragon
Tarrying in Trifles by Kyro R. Lantsberger

31 | All I Survey
Intelligibility by David W. Fagerberg

32 | The Detection Club
Frame-Up by John Peterson
Still Poirot After All These Years by Chris Chan
Casebook: A Fish Story by Steve Miller
Chesterton’s Bloodthirsty Heirs by Steve Miller

36 | Book Reviews
Education In An Age of Prejudice reviewed by Tom Martin
Kierkegaard, Kant, and Kinky Living reviewed by John C. Chalberg
Patience in The Complete Works of the Gawain-Poet

42 | All Is Grist
The Odor of Canada by Joe Campbell
Without Education: Students as Traditionalists by Kenneth Covington

44 | The Distributist
Sing a Song of Soda by Roy F. Moore