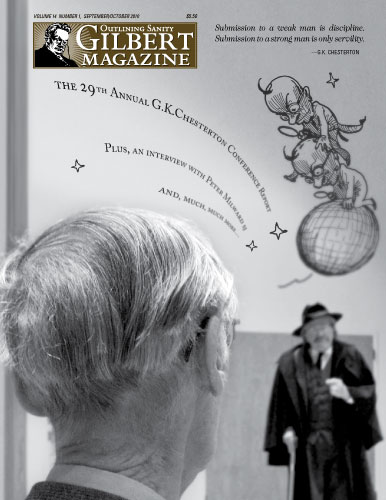 7 | EDITORIAL
Vastly Ignorant of Many Things

8 | Straws in the Wind
Immorality vs. Indecency by G.K. Chesterton

10 | Alarms and Discursions
An Interview with Peter Milward, S.J. by Sean P. Dailey

23 | All Is Grist
On Same-sex Marriage by Thomas Martin
On Loan by Joe Campbell
Running From Death by Paul Metzler
The Care and Feeding of Imaginary Pets by Lorraine V. Murray

28 | The Signature of Man
Art and Letters by G.K. Chesterton

29 | The Flying Inn
Butchering a Pig by David Beresford

30 | The Flying Stars
Who vs. What by Nancy Carpentier Brown

33 | All I Survey
Our Lady of Czestochowa by David Fagerberg

38 | Book Reviews
The War on Smokers and the Rise of the Nanny State reviewed by Dale Ahlquist
The Elusive Father Brown: The Life of Monsignor John O’Connor reviewed by Nancy Brown

44 | The Distributist
Industry by Richard Aleman

50 | Letter to America
The Age of Nonsense by G.K. Chesterton