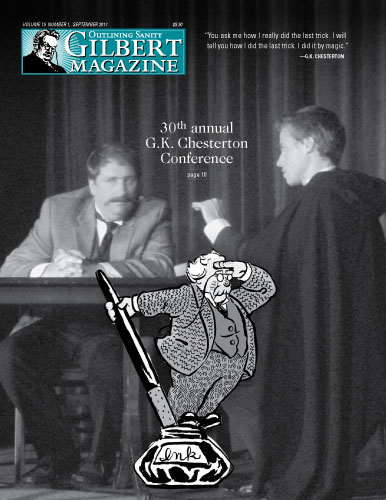 8 | Straws in the Wind
The Infinite Street by G.K. Chesterton

17 | Varied Types
Why We Need Local Societies by Victoria Darkey

18 | Schall on Chesterton
The Diabolist by James V. Schall S.J.

20 | A Miscellany of Men
Eleanor “Ellen” McCormack by Therese Warmus

25 | All is Grist
Gender versus Number by Joe Campbell
The Wildness of Modern Domesticity by K. Kelley Heyne
Gender Studies Done Right By Chris Chan
Slated by Paul Metzler
The Snail by Joey Odendahl

30 | The Ballade of Gilbert
Ballade Of A Periodical by G.K. Chesterton

32 | The Signature of Man
The Name Under a Picture by G.K. Chesterton

35 | Jogging with G.K.
Chesterton the Seer by Robert Moore-Jumonville

36 | All I Survey
The Twelve Men by David Fagerberg

37 | The Page of God’s Plenty
The Four Men–and Feasting by Sean P. Dailey

44 | The Distributist
The Beginning by Richard Aleman

46 | Fear of Film
The Testament of Dr. Mabuse reviewed by Art Livingston

50 | Letter to America
Opium of the People by G.K. Chesterton