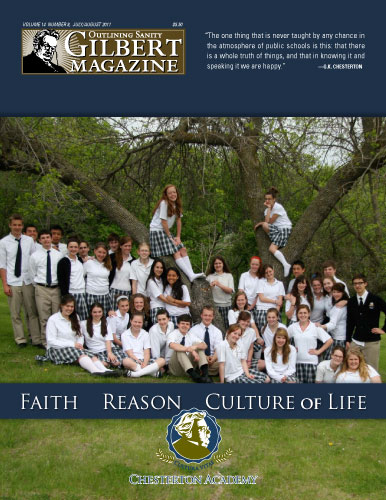 7 | EDITORIAL
A Message for the Home

8 | Straws in the Wind
The Intolerable Thing by G.K. Chesterton

10 | Alarms and Discursions
What is the most Chestertonian book you’ve ever read that was not by G.K. Chesterton?

18 | Schall on Chesterton
On the Safest Way to Drink by James V. Schall, S.J.

22 | Tales of the Short Bow
Food for Thought by James G. Bruen Jr.
A Bedtime Story by Kelsey McIntyre

26 | All is Grist
Home Invasions by Joe Campbell
Divorce Court Tango by Walt Sarafin
Story, Darn it! Story! by Daniel Collins
The Coldness of Chloe by Kara Heyne

32 | The Signature of Man
H.M. Bateman by G.K. Chesterton

34 | The Flying Stars
A Good Mystery by Nancy Carpentier Brown

35 | Jogging with G.K.
A Circular Argument by Robert Moore-Jumonville

37 | All I Survey
I Don’t See Why It Has to Be That Way by David W. Fagerberg

44 | The Distributist
The Immigrants Still Believe in God, Part II by Richard Aleman

50 | Letter to America
The Old Vigilance by G.K. Chesterton