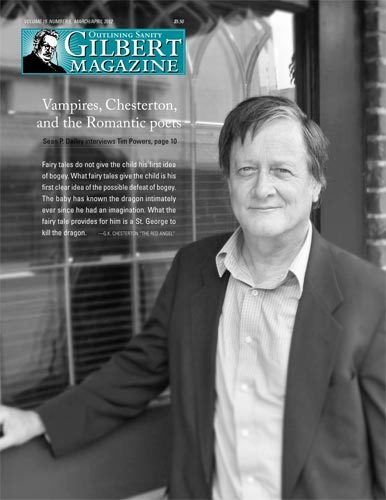 6 | Straws in the Wind
The Apostles of Unreason By G.K. Chesterton

8 | Schall on Chesterton
To Comprehend Nothing is to Pardon Nothing by James V. Schall, S.J.

10 | Alarms and Discursions
An Interview with Tim Powers by Sean P. Dailey

18 | All is Grist
What to Wear by Joe Campbell
What’s the Big Deal? by Peter D. Beaulieu
Digging a Ditch by Walt Sarafin

27 | All I Survey
Ideas, Anyone? by David Fagerberg

29 | The Signature of Man
Normandy in Black and White by G.K. Chesterton

30 | Chesterton University
Before and After by Dale Ahlquist

32 | The Detection Club
Death in the District by James G. Bruen, Jr.

44 | The Distributist
Escaping the Plutonomy by Richard Aleman

48 | Letter to America
The New Currency by G.K. Chesterton