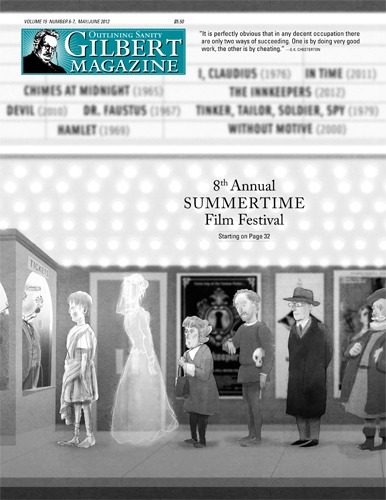 3 | EDITORIAL
Why I Won’t Vote for Mitt Romney

6 | Straws in the Wind
The Fallacy of Success by G.K. Chesterton

8 | Schall on Chesterton
On What Doesn’t Unite by James V. Schall S.J.

9 | Alarms and Discursions
Wild About Chesterton by Dale Ahlquist

14 | Miscellany of Men
Gilbert the Less by Dale Ahlquist

15 | Ballad of Gilbert
The Germ by G.K. Chesterton

17 | Varied Types
Truth is Stranger Than Fiction by Victoria Darkey

20 | Jogging with G.K.
Fear of our Goodness by Robert Moore-Jumonville

21 | All I Survey
Greater Passions by David Fagerberg

22 | The Signature of Man
The Problem with “Progressive” Artists by G.K. Chesterton

28 | Book Reviews
The Tumbler of God: Chesterton as Mystic reviewed by Chris Chan
My Lucky Life in and out of Show Business: A Memoir reviewed by David Paul Deavel
Saving Christian Marriage reviewed by John Dejak

47 | Chesterton’s Mail Bag
What is Marriage For? And More

48 | Letter to America
The Age of Antipathies by G.K. Chesterton