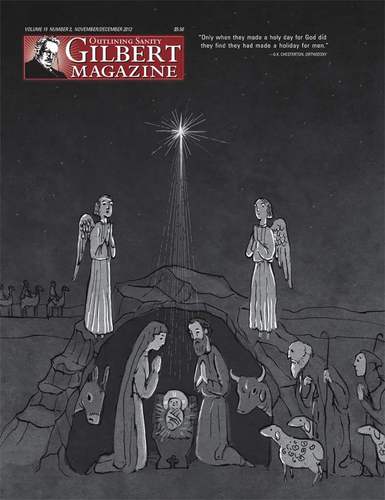 5 | EDITORIAL
Some Thoughts on the Election

6 | Straws in the Wind
Santa Claus and Science by G.K. Chesterton

8 | Schall on Chesterton
Chiefly a Conflict Between Goods by James V. Schall S.J.

10 | Alarms and Discursions
An Interview with Richard Aleman by Sean P. Dailey

14 | Rolling Road
The Fortress of Solitude by Dale Ahlquist

16 | Tales of the Short Bow
Healing Faith by James G. Bruen Jr.
In the Details by Grettelyn Nypaver

Getting With It (and the Prize) by Sylvia Barthold

24 | The Flying Inn
Craning to See by David Beresford

25 | The Flying Stars
Banking on Humility by Nancy Carpentier Brown

26 | Jogging with G.K.
Waking Up Christmas Morning by Robert Moore-Jumonville

27 | All I Survey
Buttling by David Fagerberg

28 | The Signature of Man
Ornamentation by G.K. Chesterton

29 | Chesterton University Closing the Account
The Mask of Midas

30 | The Detection Club
The Bum on the Bridge by James G. Bruen Jr.
And You Thought The Legal Systems Has Problems Now by Chris Chan
Get This Doctor to Make a House Call by Chris Chan
The Father Brown Casebook by Steve Miller
Chesterton’s Bloodthirsty Heirs by Steve Miller

39 | Fear of Film
Injustice Is Served by Chris Chan

44 | The Distributist
Participation and the Economy by Richard Aleman

48 | Letter to America
The Right to Happiness by G.K. Chesterton