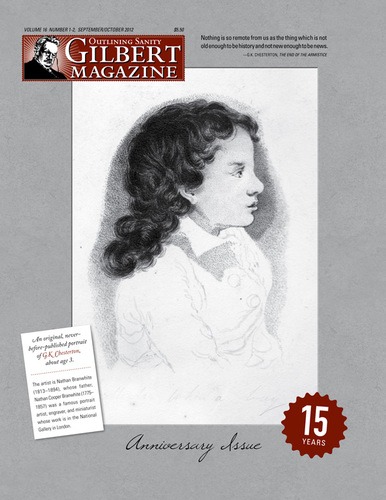 DIGITAL DOWNOAD | Ordering instructions: Upon completion of your order, you will be sent an email containing a one-time only hyperlink to download your purchase (accessible for 24 hours). Please note, you will be prompted to sign in to your account prior to download.

6 | Straws in the Wind
A Sermon on Cheapness by G.K. Chesterton

8 | Schall on Chesterton
The Light of a Strange Star By James V. Schall, S.J.

21 | Ethics of Elfland
by Reese Parquette

24 | Tales of the Short Bow
Putting Out the Trash by James G. Bruen Jr.
Dragon’s Gold by Kelsey McIntyre

32 | The Flying Inn
My Grandfather by David Beresford

34 | Jogging with G.K.
As Part of the Family by Robert Moore-Jumonville

35 | All I Survey
The Land of Mooreeffoc by David Fagerberg

36 | The Signature of Man
The Pre-Raphaelites by G.K. Chesterton

38 | The Detection Club
In the Mail by James G. Bruen Jr.
Three Cases at Once by Chris Chan
Death Stalks the Countryside by Chris Chan

48 | Ballade of Gilbert
Ballade of An Anti-Puritan by G.K. Chesterton