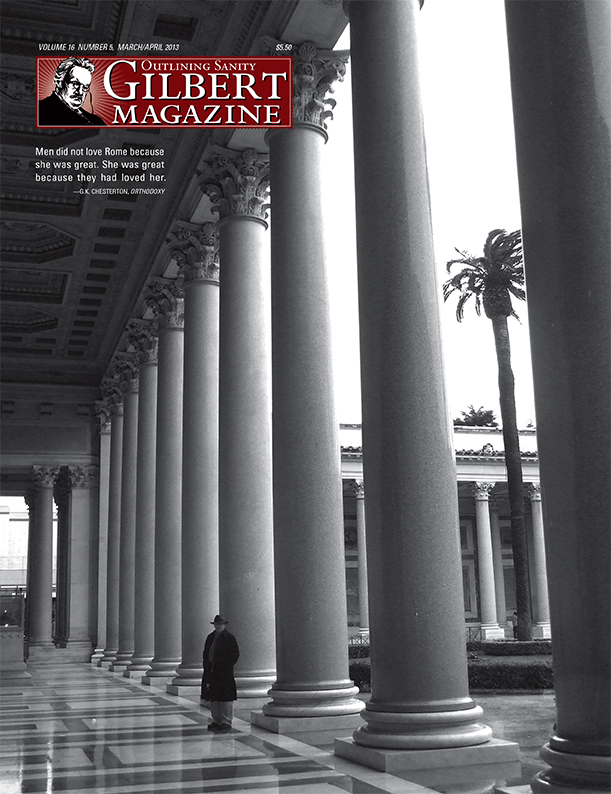 5 | Straws in the Wind
The Return of Christendom by G.K. Chesterton

8 | Schall on Chesterton
On Divorce by James V. Schall, S.J.

19 | All is Grist
Analogies, True and False by Joe Campbell
A One-Way Trip by John Kasaian
Charity by K. Kelley Heyne

20 | Ballade of Gilbert
A Certain Evening by G.K. Chesterton

27 | Varied Types
Rollin’ Up the River by Victoria Darkey, with Laurie Oswald Robinson

28 | The Flying Inn
Stick to your Guns by David Beresford

30 | Jogging with G.K.
The Time it Takes by Robert Moore-Jumonville

31 | A ll I Survey
Pope Francis by David W. Fagerberg

32 | The Signature of Man
Copying by G.K. Chesterton

33 | The Detection Club
Coffee Break by James G. Bruen Jr.
A Monster and a Miracle by Chris Chan
The Detection Club: The Father Brown Casebook
The Absence of Mr. Glass
Chesterton’s Bloodthirsty Heirs
Brief Reviews of the Contemporary Mystery Scene by Steve Miller

48 | Letter to America
The Old Nonsense by G.K. Chesterton