Charlie Reese
From the September/October 2022 Issue of Gilbert Magazine

It’s a sad state of society that in the last 25 years our TVs have gotten thinner while most of us viewers have gotten fatter. Even worse, the empty calories dished up in the programming streaming into homes these days do nothing to nourish the mind. With hundreds of reality shows and Hallmark Christmas movies (all with the exact same plot), the television industry has become bloated with bland offerings despite beaming through thinner than ever devices. A paradox indeed.

Fortunately, for society, there is something else in the last 25 years that was cooked up that does nourish the mind and exercises every thinking person’s thought processes – Gilbert magazine!

Unlike other journals that parse the prose of writers long vanished to quieter vales, Gilbert is delivered into the hands of a more diverse group of readers than all the literary magazines ever published. All kinds of professionals read and contribute to this publication, for why should literature be limited to academics? No other literary journal in the world is read by farmers to physicians, and everyone in between. And there is one segment of the population that eagerly awaits new issues of Gilbert – inmates! The writings of G.K. Chesterton have turned the hearts and minds of countless people over the years, and since Gilbert was first published in 1997 we have heard the conversion stories of many readers in all walks of life and manner of ‘gated communities’! Top that, Western Humanities Review!

There’s another distinguishing feature of Gilbert that no other literary journal ever devised would dare to have: a Clerihew Corner. Of all the types of poetry in the pantheon of literature – from sonnets to haikus to epics – this unique verse has a requirement that would certainly confound all the serious literature professors who tsk tsk their way toward tenure. The requirement is that a Clerihew must be funny. For some people, that requirement would be harder than achieving tenure!

Yet beyond these unique characteristics of Gilbert magazine there are additional benefits. Every edition contains the prophetic wisdom of one of our greatest writers and thinkers, G.K. Chesterton. His writings from a century ago are often placed side by side with current events to demonstrate that there are some timeless virtues that outlive every generational fad and trend. Plus there are inspiring and invigorating reports about the incredible phenomenon of the Chesterton Academies arising all across the land. Young students contribute essays (and Clerihews!) to this journal, perpetuating the truths G.K. Chesterton wrote of in another age that are still true today. This truly is a literary journal for the ages.

And, as mentioned earlier, it is published by no ordinary literary society. Most literary societies discuss literature, maybe publish a journal, occasionally burnish the bonafides of those seeking tenure, but how many put on an annual conference where laughter, cigars, and sacraments are in the mix? How many literary societies have local societies in a growing number of states, or have established schools from coast to coast and in foreign lands?

Look no further for the answer to those questions than the Society of G.K. Chesterton. If you are holding this journal in your hands you are a part of the most relevant and living literary movement the world has ever known. Chesterton said a dead thing can go with the stream, but only a living thing can go against it. You are the living thing that goes against the streaming of banal ‘entertainment’ coming through televisions in millions of homes around the world. Keep turning the pages, and let’s pray the world turns with us!

Charlie Reese is Chairman of the Board of Directors for the Society of Gilbert Keith Chesterton, and more importantly, a two-time wearer of the Clerihew Championship Sash. 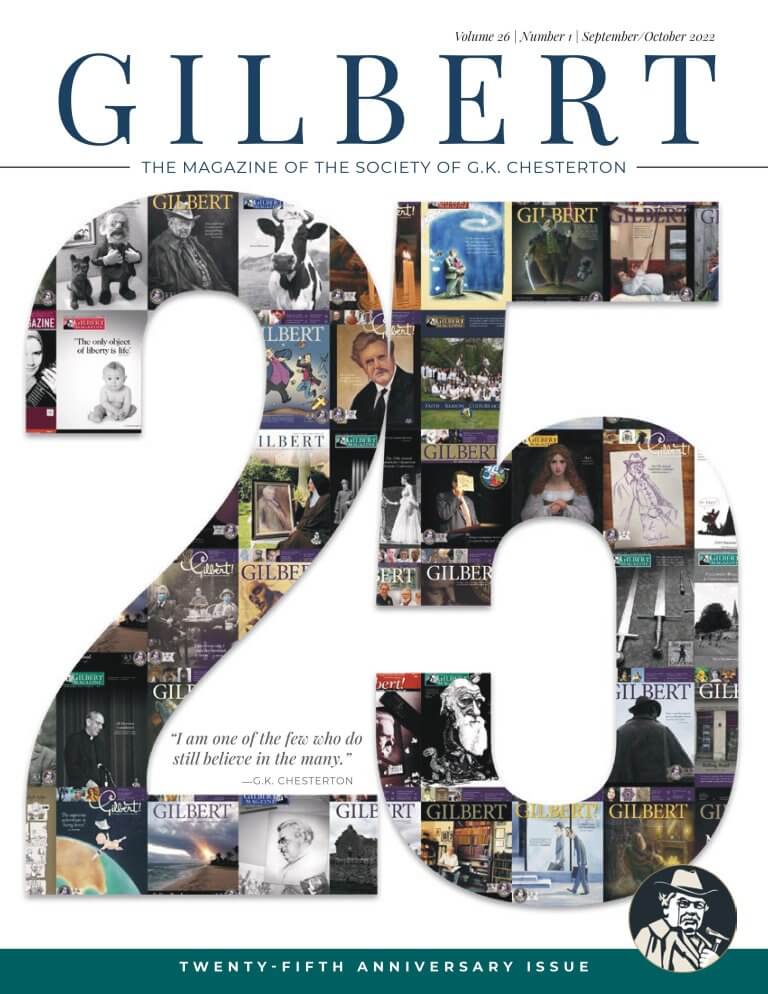