The Spirit of the Age

Dale Ahlquist
From the May/June 2022 Issue of Gilbert Magazine

Why is G.K. Chesterton so prophetic?

I would meekly suggest that it is because in his own age he never submitted to the Spirit of the Age. He is never swept away by fads and fashions. Rather, he recognizes and ridicules them. He always keeps his eternal perspective. By focusing on the timeless truths, he has remained timely beyond his time.

Chesterton sees that if we follow the fads, they will undo us even as they undo themselves.

The Spirit of the Age, ironically, is the worst enemy of the Age. It is what destroys it.

The first lesson of the book Orthodoxy is that a bad philosophy, when taken to its logical conclusion, when reduced to its essence, is insane. It is single-minded nonsense, “the clear, well-lit prison of one idea.” Lesson two is that it ends not just in madness, but in self-destruction.

The attack on language – emptying commonly understood words of their meaning, even to the point of making words mean exactly what they do not say, and giving meaning to words that are simply nonsense, and then to substitute catchwords for actual thinking – is part of the attack on reason that marks the Spirit of the Age. A secular world is certainly known for being inhospitable to faith, but it is even more unwelcoming to reason. It feeds on emotion and suggestion.

Thinking is hard work. It involves the right use of words that correspond to reality. Reason means using words correctly. It also means using grammar correctly. Chesterton says: “Some of the most enormous and idiotic developments of our modern thought and speech arise simply from not knowing the parts of speech and principles of language, which we once knew when we were children.” He says that most modern sophistries can be found in old Latin grammar books where they appear as amusing mistakes worth avoiding. “For most fundamental falsehoods are errors in language as well as in philosophy. Most statements that are unreasonable are really ungrammatical.” Adjectives have become more important than nouns. Verbs have become nouns. Prepositions have replaced nouns, and have replaced almost all the other words. Like like. There used to be rules about pronouns. Now there are personal preferences. Language is up for grabs.

The institutions that have been charged with teaching such things as grammar to our children have a very important role to play in the formation of the minds of the next generation. If they are actively undoing grammar and destabilizing the foundation of language, they have betrayed their commission. If they are taking apart texts in order to empty them of their meaning, they are not teaching; they are destroying. It is akin to training firefighters how to use matches and propane but not water-hoses.

But there are those of us who are fighting back against the Spirit of the Age. When we first began to gather a small group of enthusiasts for G.K. Chesterton and his refreshing common sense, our goal was simply to get more people to read him because if they did, good things would happen.

And those good things have happened and keep happening. And the size of our little club has slowly grown, though it is still not very big. But even as we continue to promote GKC, we have taken on a new task that is much bigger. The Chesterton Schools Network.

We are helping people – parents, priests, and other partners – to start local secondary schools to counteract and even undo the damage done by our educational system. We are giving parents back the control of their children’s intellectual and spiritual formation. We are teaching truth, beauty, and goodness. And grammar.

And as a result, we are seeing more good things happening everywhere.

It is a constant struggle to stay calm when nothing around us is calm. It is difficult to stay sane when it seems the whole world has gone insane. And it is a challenge to remain joyful when all the news is depressing and the so-called entertainment is even worse. But in G.K. Chesterton we have a model of the calm that comes from certitude, the sanity that comes from clear-thinking, and the joy that is “the gigantic secret of the Christian.” 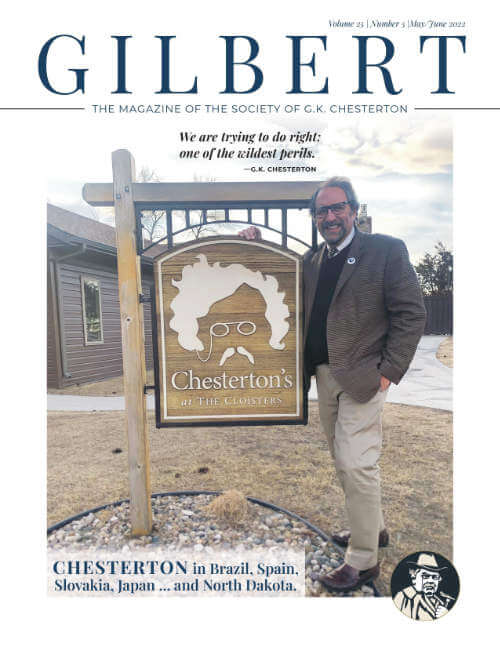