St. Thomas confronts other creeds of good and evil, without at all denying evil, with a theory of two levels of good.

The difficulty of dealing with St. Thomas Aquinas in this brief article is the difficulty of selecting that aspect of a many-sided mind which will best suggest its size or scale. Because of the massive body which carried his massive brain, he was called “The Ox”; but any attempt to boil down such a brain into tabloid literature passes all possible jokes about an ox in a teacup. He was one of the two or three giants; one of the two or three greatest men who ever lived; and I should never be surprised if he turned out, quite apart from sanctity, to be the greatest of all. another way of putting the problem is to say that proportion alters according to what other men we are at the moment classing him with or pitting him against. We do not get the scale until we come to the few men in history who can be his rivals.

Thus, to begin with, we may compare him with the common life of his time; and tell the story of his adventures among his contemporaries. In this alone he shed a light on history, apart from the light he shed on philosophy. He was born in high station, related to the Imperial house, the son of a great noble of Aquino, not far from Naples, and when he expressed a wish to be a monk, it is typical of the time that everything was made smooth for him – up to a point. A great gentleman could be decorously admitted into the now ancient routine of the Benedictines; like a squire’s younger son becoming a parson. But the world had just been shaken by a religious revolution, and strange feet were on all the highways. And when young Thomas insisted on becoming a Dominican – that is a wandering and begging friar – his brothers pursued him, kidnapped him and shut him up in a gaol. It was as if the squire’s son had become a gipsy or a Communist. However, he managed to become a friar; and the favourite pupil of the great Albertus Magnus at Cologne. He afterwards proceeded to Paris, and was prominent in defending the new mendicant orders at the Sorbonne and elsewhere. From this he passed to the great central controversy on Averroes and Aristotle; in effect to the great reconciliation of Christian faith and Pagan philosophy. His external life was prodigiously preoccupied with these things. He was a big, burly, baldish man, patient and good-natured, but given to blank trances of absence of mind. When dining with St. Louis, the French King, he fell into a brown study and suddenly smote the table with a mighty fist, saying: “And that will settle the Manichees!” The King, with his fine irony of innocence, sent a secretary to take down the line of argument, lest it be forgotten.

Then he could be compared with other saints or theologians, as mystic rather than dogmatic. For he was, like a sensible man, a mystic in private and a philosopher in public. He had “religious experience” all right; but he did not, in the modern manner, ask other people to reason from his experience. He only asked them to reason from their own experience. His experiences included well-attested cases of levitation in ecstasy; and the Blessed Virgin appeared to him, comforting him with the welcome news that he would never be a Bishop. Similarly, we might compare the Thomist scheme with others, touching on the points in which Scotus or Bonaventura differed from it. There is no space for such distinctions here, beyond the general one; that St. Thomas tends at least relatively to the rational; the others to the mystic; we might almost say the romantic. In any case, there was certainly never a greater theologian, and probably never a greater saint. But saying that he was greater than Dominic or Francis, would not (in the sense needed here) even hint at how great he was.

To understand his importance, we must pit him against the two or three alternative cosmic creeds: he is the whole Christian intellect speaking to Paganism or to Pessimism. He is arguing across the ages with Plato or with Buddha; and he has the best of the argument. His mind was so broad, and its balance so beautiful, that to suggest it would be to discuss a million things. But perhaps the best simplification is this. St. Thomas confronts other creeds of good and evil, without at all denying evil, with a theory of two levels of good. The supernatural order is the supreme good, as for any Eastern mystic; but the natural order is good; as solidly good as it is for any man in the street. That is what”settles the Manichees.” Faith is higher than reason; but reason is higher than anything else, and has supreme rights in its own domain. That is where it anticipates and answers the anti-rational cry of Luther and the rest; as a highly Pagan poet said to me: “The Reformation happened because people hadn’t the brains to understand Aquinas.” The Church is more immortally important than the State; but the State has its rights, for all that. This Christian duality had always been implicit, as in Christ’s distinction between God and Caesar, or the dogmatic distinction between the natures of Christ. But St. Thomas has the glory of having seized this double thread as the clue to a thousand things; and thereby created the only creed in which the saints can be sane. It presents itself chiefly, perhaps, to the modern world as the only creed in which the poets can be sane. For there is nobody now to settle the Manichees; and all culture is infected with a faint unclean sense that Nature and all things behind us and below us are bad; that there is only praise to the highbrow in the height. St. Thomas exalted God without lowering Man; he exalted Man without lowering Nature. Therefore, he made a cosmos of common sense; terra vientium; a land of the living. His philosophy, like his theology, is that of common sense. He does not torture the brain with desperate attempts to explain existence by explaining it away. The first steps of his mind are the first steps of any honest mind; just as the first virtues of his creed could be those of any honest peasant. For he, who combined so many things, combined also intellectual subtlety and spiritual simplicity; and the priest who attended the deathbed of this Titan of intellectual energy, whose brain had torn up the roots of the world and pierced every star and split every straw in the whole universe of thought and even of scepticism, said that in listening to the dying man’s confession, he fancied suddenly that he was listening to the first confession of a child of five.

This uncollected essay first appeared in The Spectator, Feb. 27, 1932, before Hodder and Stoughton commissioned Chesterton to write his book-length study of St. Thomas Aquinas. 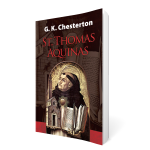