Dale Ahlquist
From the November/December 2021 Issue of Gilbert! Magazine

At the risk of sounding like Scrooge, I fully intend to shoot Rudolph and mount his head, red nose and all, over my mantelpiece this holiday season. And I really don’t mind sounding like Scrooge, the immortal Dickens character from “A Christmas Carol.” His complaints are compelling, and we can laugh at them in a detached way. But the reason we really like him is that he is a convert. When he falls to his knees, he brings us to our knees along with him. We always rejoice at the end of that story in its countless retellings because a soul has been rescued from hell.

In the meantime, we live through a form of hell that ironically begins the day after Thanksgiving. The secular world calls it the Holiday Season. The Catholic Church calls it Advent. The two are starkly different, but the one thing they have in common is suffering. One group has started early with the Christmas cheer, and they wonder why they are so miserable. The other group is waiting, waiting, anticipating the great day, and the wait is hard. Advent is supposed to be a mini-Lent, a time of prayer and penance and abstention. Let’s talk about all three, not in that order.

For me, the chief form of penance during Advent is shopping. I’m not talking about Christmas shopping. I’m talking about any shopping: grocery shopping or hardware shopping or buying gas at the station. Why? Because every retail establishment feels obligated to inflict on us that grindingly obnoxious “holiday” music. It starts blaring right on cue the day after Thanksgiving, as if to say, “Stop being thankful, and start feeling the pain.” They won’t play the beautiful carols because those tend to mention shepherds and angels and heavenly hosts and virgins, and, when it comes right down to it, that specific baby who apparently never fussed and yet caused all the fuss. No, only music that is empty of Christmas content is allowed: the jingle jangles about Santa and Rudolph and Frosty the Snowman and memories that nobody has about horses and unlikely demands that snow be let and let and let. To make them more unbearable, the songs have been jazzed up or heavily electrified, and the singers screech rather than sing them. Add to these “traditional” tunes the more contemporary offerings that involve one pounding line repeated about 47 times. The only time we hear the word “Christmas” is in such titles as “Honky Tonky Christmas.” Not sure what that even means. And “All I want for Christmas is You.” Pretty sure what that means. Restaurants, which can always be counted on to play bad music, really ramp it up during December. In any case, none of these songs exactly evoke peace on earth. And any good will is put to the extreme test.

Thus the penance, the pain, the longing for relief. The Christmas tree has become a cross.

It all comes to an abrupt and undramatic end on Christmas Day. All the decorations in the stores magically disappear and the horrible music mercifully ceases.

That is when Christmas actually begins. Christmas Day is … the First Day of Christmas. We have twelve days of feasting and celebration. When the world’s party has ended, ours has just begun. The holidays – the holy days – can finally be observed in their fullness. And we can start listening to decent music.

The world is out of whack about most things, as epitomized by its getting Christmas totally wrong. It attempts to celebrate it before it happens and without the actual reason for celebrating it. It partakes of Christmas pleasures throughout Advent, and then walks away just as the real event gets underway. The result is a pleasure that is unsatisfying. Abstinence is not a concept the world takes a liking to. It has the same problem with Advent that it has with sex and marriage. Celebrating too soon, and then not properly celebrating at the right time. Not feasting at the right time and then fasting at the wrong time.

And the Advent prayer? “Wretched man that I am! Who will deliver me from this body of death?” (Romans 7:24) Bet you didn’t think of that one. It gets the penance and the anticipation just right.

How do we best express that anticipation? Well, we turn to G.K. Chesterton for help. The march towards finally saying “Merry Christmas” is “the power of expressing, not negative happiness, but positive hilarity … It is this power of rising into the seventh heaven of mere temper the moment a strain is relaxed; of being cut loose like a captive balloon or springing skyward like a released rocket, that is really the reward of virtue. It is not the power of saying, ‘Let us feast; for tomorrow we die.’ It is the power of saying, ‘Let us fast; for tomorrow we feast.’” 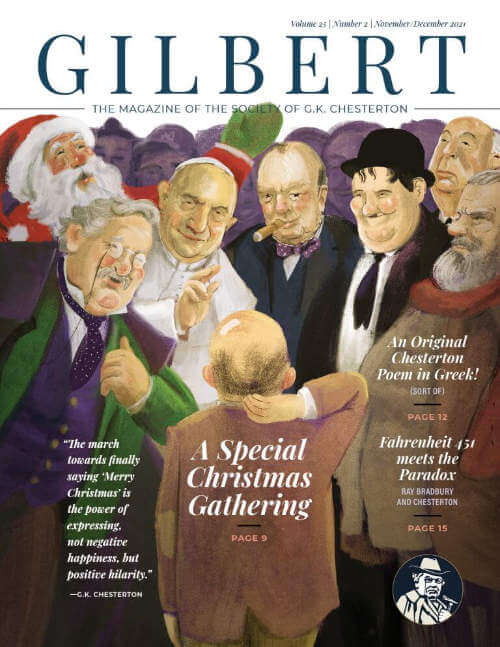