The Problems with Progress

Dale Ahlquist
From the July/August 2022 Issue of Gilbert Magazine

G.K. Chesterton takes a dim view of Progress, calling it not an illusion but a disillusion, that is, a disappointment. He argues that what we call Progress has not been good for civilization. “Unbelievers as well as believers have grown less and less rational. Reactionaries as well as revolutionaries have grown less civilized.” The love of classical antiquity degenerated in Fascism. The skepticism of the Enlightenment degenerated not merely into materialism but into militant Marxism. And what was once “the most polished and courtly tradition of the West, the only aristocracy of America, has left behind it a sort of filthy parody, dancing on its grave, in the antics of the Ku-Klux-Klan. When things that were once well-mannered thus become crude or brutal, it is no wonder that worse has happened to things that never had any manners; such as Big Business or Evolutionary Eugenics.”

As hinted in the previous paragraph, Chesterton’s references to America in this volume of G.K.’s Weekly are especially striking. He says that our individualism borders on anarchism, and our standardization borders on slavery. As bad as the power of centralized government is to personal freedom, he predicts that it will be usurped by something even worse: the power of centralized business. “It will be exactly like Socialism in being uniform, universal, official, oppressive.” In the meantime, our government makes laws and policies that achieve the exact opposite of their intentions. “All our laws are against the poor man, even when they are in theory on the side of poor men.”

As a journalist, he sees that the Press practices great power and influence through publicity, sways the mood of the mob, and then disclaims its power or and its responsibility. The Press blows an issue out of proportion, and then when it blows up, reports about it with a shocked indignation. For instance, “People are always prone to talk nonsense about race.” Be reminded, it was nearly a century ago when Chesterton writes these words. But he points out that the problem, however, is not the races, but the human race. “Any man who expects the human race to be entirely cured of folly is a fool, who had far better begin with curing himself.”

And what of democracy?

People are naturally complaining nowadays that the Country is disappearing. In truth it is the Town that is disappearing. The original and essential human thing called a Town has almost entirely disappeared in a sea of formless suburbanism … a featureless and frontierless wilderness called the public, cut up into these arbitrary squares only for the purpose of sham elections and only too real taxation. We have beheaded the republic, as we did the king; and left only the public – a dismal object.

We have lost control of everything that most directly affects us. We’ve replaced property with the paycheck. Our emphasis on youth has only made the young old before their time. We are no longer birds on nests, but birds in cages.

But Chesterton’s prophecy about Progress is not solely a screaming jeremiad about what is wrong with the world. Like any good prophet, he offers a solution, not that it’s an easy one. We start solving the big problems that we can’t control by taking care of the little problems that we can control.

It often happens in history that things intensely small and local, or even backward and barbaric, defend themselves with great success against empires and combines, simply because they are too remote to have been overawed by mere cosmopolitan rumour and reputation. There are some fortunate communities that are too ignorant to be bullied, too superstitious to be frightened, too poor to be bribed, and too small to be destroyed. It is probably in these minute and secret places that the seed of civilization will be preserved for future ages, through the blundering anarchy of big things which seems to be coming upon us.

And we could say that it begins at an even more local level than our community, even more local than our family. It begins in our hearts and in our souls: “To a Catholic it is the necessary system of religion that is logical and marching and militant; but that the heart of all that system is a broken heart, the core of all that music a breaking voice; and that the last reality is that which is the most personal; which is not only love but pardon.”

Elsewhere Chesterton describes Progress as a rut, a false philosophy of fatalism and endless improvement. It is a promise of freedom, but the actual results are servitude – to the regulatory state, to the unforgiving corporation, to the latest fashionable idea, to the materialist mentality that is unwelcoming to and increasingly oppressive to the faith.

But the answer is in faith, both immediately and ultimately. Instead of following the fashion and following the world, we are to follow Christ – and all that that entails. Chesterton says, “To take up the cross is not a servitude; it is something far more terrible and intimidating: a freedom.” 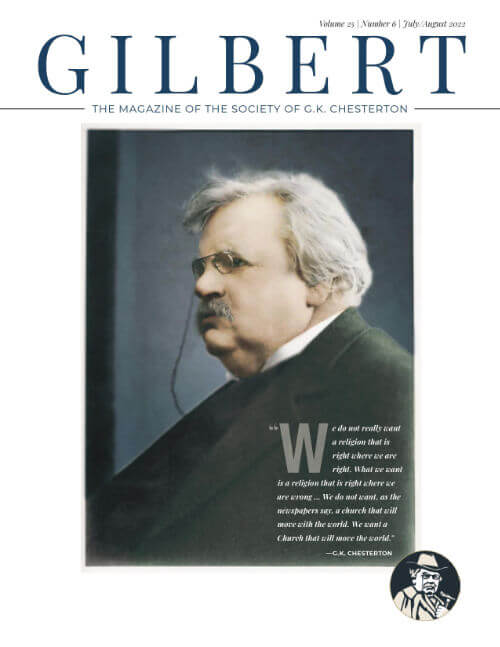