The Way to Heaven

Dale Ahlquist
From the September/October 2021 Issue of Gilbert! Magazine

Today – the day I am writing this – I received two letters.

The first was from the White House. It was written on behalf of the President of the United States, who was requesting me to resign from the National Board of Education Sciences. It further informed me that if I did not resign by 6 pm this evening, I would be terminated. It ended by saying, “Thank you for your service to our country.”

My “service” has consisted of waiting for the last nine months to be invited to meet with the rest of Board for one of its two annual meetings that are mandated by law. This letter was the first acknowledgement that I had received from the present administration that I had in fact been appointed to this position by the previous President. I have never received my actual commission (which I hear is an impressive-looking document), and as I say, I have not been invited to attend a board meeting, which could not meet because there was not a quorum because none of the other recent Presidential appointees have been invited to attend a board meeting.
This action of trying to terminate me before I could take office was in direct defiance of a landmark Supreme Court decision from 1804 known as Marbury vs. Madison, which established the separation of powers in the United States, where the high court overruled the Executive branch in a case where the President had tried to remove a Presidential appointee from a previous administration without installing him in office.

I replied to the White House letter by asking why I was being asked to resign, and why, if I did not resign, I was being terminated. I will await a response, and I’m not worried one way or the other, but let’s just say the last chapter in this story has not yet been written.

The other letter was from a gentleman in Florida. It consisted of three sentences. The first said that his wife had recently been diagnosed with uterine cancer. The second said that upon receiving the diagnosis, he immediately began praying for the intercession of G.K. Chesterton. The third said that his wife had just had two biopsies which showed only two benign polyps and no trace of cancer.

The letter was addressed to “To Whom it May Concern.” The gentleman did not know who I was. All he had was one of our Chesterton prayer cards, and he contacted us through our website, which is printed on the prayer card. I have followed up, requesting more information and documentation for what could possibly be a miraculous healing through the intercession of G.K. Chesterton.

These two letters, side-by-side in front of me, are not only a snapshot of my life at the moment but a concise summary of the past 25 years.

When I stumbled into helping start our organization a quarter of a century ago, I had really only one thing in mind: getting more people to read Chesterton. “Discover and Re-Discover G.K. Chesterton,” is what our first brochure said. At that point, only a few of his books were in print, he wasn’t being taught anywhere, and two generations had never heard of him.

Shortly after wandering after Chesterton all the way into the Catholic Church, I suddenly found myself on the Catholic Global Television, doing a show on my favorite writer and reaching millions of people. Then the Chesterton revival kicked into full gear. His books started coming back into print as well as books about him. He became the subject of academic dissertations. He even started showing up in the classroom.

However, I figured out that as wonderful and varied and entertaining and uplifting as his writing is, the most important thing about G.K. Chesterton is his holiness. I was watching him create an army of converts. He was inspiring people to change their lives. They were drawn to more than his intellectual fireworks. They were drawn to his goodness. And so, one of the goals of the Chesterton Society became getting our hero raised to the altar.

When I helped start the Chesterton Society, I had no intention – I had no idea – of ever starting a school. But 14 years ago, that’s what happened, and that school has led to over 40 other schools around the country and around the world. The accomplishments of the Chesterton Schools Network garnered enough attention to get me recognized and then erased at the highest levels. I have become, as Chesterton describes the early Christians in The Everlasting Man, “important enough to be ignored.”

I probably won’t ever have the opportunity to do anything about fixing American education from the top. But I’m certainly content to keep working effectively at the bottom as part of a grassroots revolution that could turn our wayward culture around.

Meanwhile the revival of interest in Chesterton has also stirred up attacks on him. The cultus of devotion has sparked a backlash of spite.

But regardless of the misrepresentations, the bad press, the even worse arguments, and the strange snarling at the prospect of Saint Gilbert, the reality remains that people are praying the prayer on that prayer card. And the evidence is starting to show that the prayers are being answered. So it really doesn’t matter what our enemies say. It never does.

“It takes a long time to get to heaven,” says Chesterton. That’s a great line you’ve never heard unless you’ve obtained a copy of Black and White, a unique new book of previously uncollected early essays from GKC. A line that good is a good enough reason to get the book. But the next line is even better: “Obstacles on the way to heaven are the romance of spiritual existence.”

I’ve encountered a fair number of obstacles on the way to heaven, but Chesterton gives me plenty of encouragement that I am indeed on the right road. The obstacles are part of that road, but as GKC points out, they are “the romance of spiritual existence.” It has been a great adventure – and a great romance – thus far. Let’s see what happens in the next 25 years. 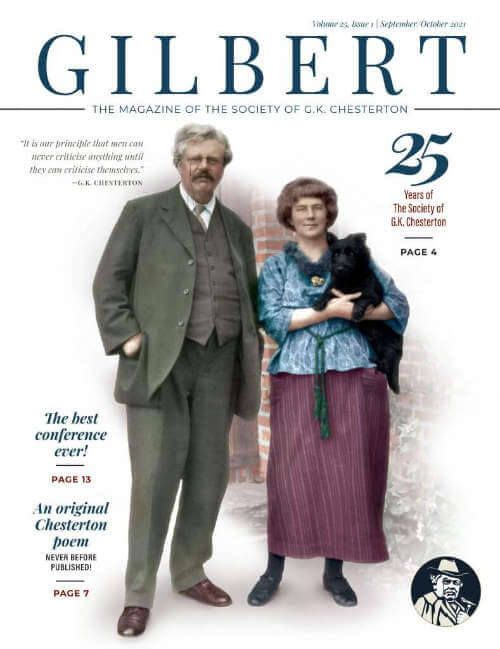