Holly Ordway
From the March/April 2021 Issue of Gilbert! Magazine

J.R.R. Tolkien and G.K. Chesterton, two giants of the 20th century literary scene, might even be considered as a pair of patron saints for Catholic writers. It is all the more fitting, then, to discover that Tolkien knew Chesterton’s work well—in fact, his daughter Priscilla said he was “steeped in it”—and delighted in it.

Chesterton and Tolkien were near-contemporaries. They were born only eighteen years apart, and Chesterton died, relatively young, at sixty-two, when Tolkien was forty-four. It is possible that Tolkien even heard Chesterton speak in person, for he gave an evening lecture on the topic of “Romance” at the Oxford Examination Schools in the Trinity term of 1914, when Tolkien was in residence.

The two men were alike in many ways. Both were devout Catholics, with a particular devotion to the Blessed Virgin, a delight in Christmas, and a deep love of family life, including a keen sense of what children genuinely enjoy (as opposed to what adults often assume that they enjoy). Tolkien created the illustrated Father Christmas letters for his children, and his daughter Priscilla recalled that her father “was often an entertainer at children’s parties held in the summer and at Christmas” hosted by the Sacred Heart Convent in Oxford. George Sayers recalled that on what would be his final visit to the elderly Tolkien, he found Tolkien happily playing trains with his great-grandchildren, and commented that “This love for children and delight in childlike play and simple pleasures was yet another thing that contributed to his wholeness as a man and the success of his books.”

Both men were also amateur artists of considerable talent and enthusiasm. For Tolkien, the production of art was an integral part of his life, starting from his boyhood; Priscilla noted that art supplies gave her father “particular pleasure, and they continued to do so right through his life,” and his children recalled that his study at home was full of “wonderful boxes of Koh-i-Noor coloured pencils, and tubes of paint with magical names like Burnt Sienna, Gamboge and Crimson Lake.” She and her brother John also recalled that their father “demonstrated how white could be an addition to a painting, rather than an absence of colour”—a view that Chesterton took in his essay “A Piece of Chalk.” Although he only saw a few examples of Chesterton’s art, in the illustrated anthology The Coloured Lands, it is interesting to note that Tolkien’s early ‘Ishness’ paintings show intriguing resemblances to Chesterton’s landscapes, in their use of color and abstract form.

Tolkien read widely in Chesterton’s work, both literary and non-fiction. He knew the apologetic works Heretics and its follow-up, Orthodoxy, and George Sayers recalls that Tolkien had “a great liking and appreciation for The Everlasting Man” and that Tolkien found its arguments to be “absolutely valid.” He enjoyed Chesterton’s literary works, but not in the ways one might predict, disliking the detective stories featuring Father Brown, the Catholic priest. (A great fan of Agatha Christie’s mysteries, Tolkien seems to have preferred his detective fiction to focus on the puzzle plots, not on character and theme.)

He delighted in Chesterton’s more antic works: he knew The Man Who Was Thursday and The Napoleon of Notting Hill, and used to chant aloud his comic poems, most notably “The Song of Quoodle,” “The Song against Grocers,” and “The Rolling English Road.” These are all featured in The Flying Inn, a satiric tale of a near-future England in which the personal freedom of ordinary people, in particular the poor, is under attack from a paternalistic government intent on improving public health by abolishing alcohol. We may perhaps see a Chestertonian influence upon one telling detail in The Return of the King, where we learn that Lotho Sackville-Baggins, after taking over the Shire as ‘Chief,’ “didn’t hold with beer, save for his Men, and closed all the inns.” In its way, this amounts to a capsule summary of The Flying Inn, with its exposé of the way that Prohibition is used in order to gain social control of the working classes for the benefit of a bureaucratic elite.

Of Chesterton’s other poetry, Tolkien had once upon a time enjoyed The Ballad of the White Horse. When he revisited the ballad to help Priscilla understand it, he found the poem unsatisfactory on the ground of its historical inaccuracy, but even on a second, less enthusiastic reading, he still approved the “brilliant smash and glitter of the words and phrases.”

Tolkien also admired the poem Lepanto without, as far as we know, any second thoughts; Priscilla recalled that her father enjoyed reciting it. At 143 lines, the poem is long enough that if Tolkien indeed recited the entire poem from memory, rather than reading it aloud or recalling selected passages, it highlights the retentive quality of his memory, a fact worth bearing in mind more generally as we consider how his reading influenced his creativity.

Lepanto’s subject is the Christian defense of the West against an invasion of the Ottoman Turks in 1571, when the Holy League, assembled by Pope Pius V, achieved an unlikely victory at Lepanto in the Gulf of Patras. The outcome was attributed to the Virgin’s intercession, and the day of the battle, October 7, became dedicated to Mary as Our Lady of Victory (soon thereafter renamed the Feast of Our Lady of the Holy Rosary). This aspect of Lepanto was likely part of its attraction for Tolkien, who had an unabashed devotion to the Blessed Virgin, and whose character of Galadriel, we should remember, has Marian resonances.

Chesterton’s poem has some intriguing points of similarity with the final battle of the West against the forces of Sauron. Like the Holy League, the forces led by Aragorn in The Lord of the Rings are a diverse coalition who, despite being badly outnumbered in their assault upon Mordor, are ultimately victorious (though the details of the battles are of course significantly different). Furthermore, the leader of the Holy League is Don John of Austria, whom Chesterton describes as “a crownless prince” upon a “nameless throne.” Aragorn keeps his true identity hidden for much of Tolkien’s story, making him effectively ‘nameless,’ while nevertheless being the subject of the poetic prophecy that “The crownless again shall be king.”

In my research for Tolkien’s Modern Reading: Middle-earth Beyond the Middle Ages, I discovered that Tolkien had read much more widely in modern (post-1850) literature than had hitherto been recognized—and that he took it very seriously, considered it thoughtfully, and had his creative imagination nourished and shaped by it. Tolkien had a Chestertonian generosity of spirit combined with child-like exuberance; now we know that he also shared with the brilliant Beaconsfield writer a willingness to explore and engage with the literary culture of his day.

Holly Ordway is the Cardinal Francis George Fellow of Faith and Culture at the Word on Fire Institute. Her new book, Tolkien’s Modern Reading: Middle-earth Beyond the Middle Ages can be found at https://wordonfire.org/tolkien. 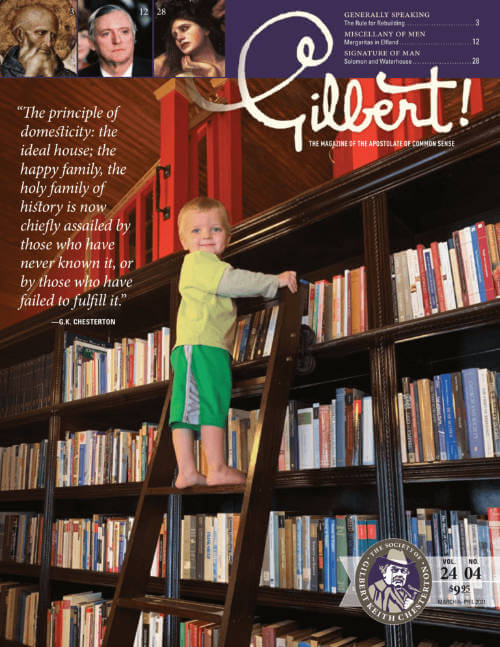