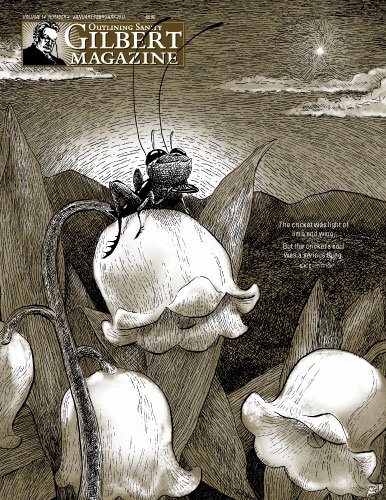 8 | Straws in the Wind
Quackery About The Family by G.K. Chesterton

14 | Schall on Chesterton
On Men Being Like Gods by James V. Schall, S.J.

17 | Ballad of Gilbert
Lilies Of The Valley by G.K. Chesterton

21 | All Is Grist
Keeping Up by Joe Campbell
Hawking’s Opinion Goes Against the Giants of Science, Philosophy by Joseph Racioppi
Chesterton and Conversion by Art Livingston
‘Girl, Please!’ by Lorraine V. Murray

27 | Chesterton University
Hark! Laughter Like a Lion Wakes The Spirit of Christmas

28 | The Signature of Man
The Venus de Milo by G.K. Chesterton

31 | Jogging with G.K.
In the Dark by Robert Moore-Jumonville

33 | All I Survey
From Out of the Past, Met in the Future by David W. Fagerberg

44 | The Distributist
The Banishment of Agapé by Richard Aleman