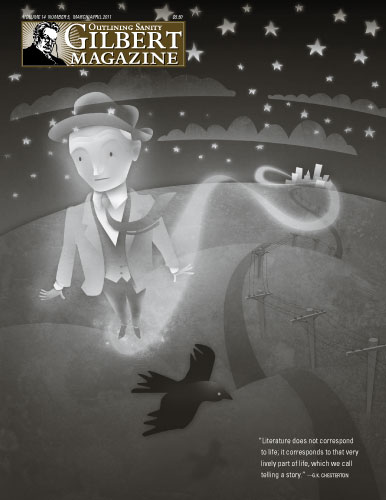 10 | Straws in the Wind
Advice to Literary Murderers by G.K. Chesterton

20 | Schall on Chesterton
On Creeds by James V. Schall, S.J.

27 | All Is Grist
Go Left, Young Man by Joe Campbell

28 | The Ballade of Gilbert
The Arena by G.K. Chesterton

29 | Chesterton University
A Library in One Volume by Dale Ahlquist

30 | The Signature of Man
William Morris by G.K. Chesterton

31 | The Flying Inn
Honesty and Work by David Beresford

33 | Jogging with G.K.
Running is Suicide by Robert Moore-Jumonville

35 | All I Survey
Recognition, The Higher Pleasure by David Fagerberg