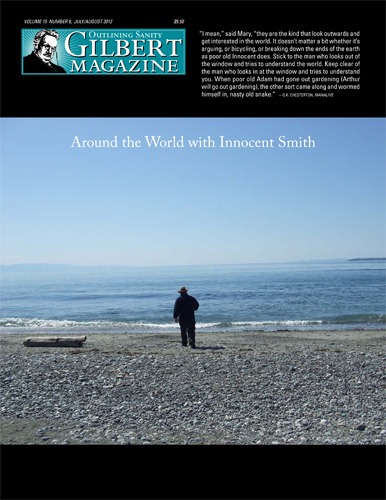 7 | EDITORIAL
A Response to the Response by Dale Ahlquist

8 | Straws in the Wind
The March To Main Street by G.K. Chesterton

12 | Alarms and Discursions
An Interview with Dr. Benjamin Wiker by Grettelyn Nypaver

20 | All is Grist
Defining Diversity by Joe Campbell
The Rightness of Fasting and Feasting by K. Kelley Heyne

28 | Jogging with G.K.
When Nature Calls by Robert Moore-Jumonville

29 | All I Survey
Weeds by David Fagerberg

30 | The Signature of Man
Dutch Painting by G.K. Chesterton

38 | Book Reviews
G.K. Chesterton at the Daily News reviewed by Dale Ahlquist
My Peace I Give You reviewed by Chris Chan
Off the Shelf by Franklin Freeman

44 | The Distributist
Return to Solzhenitsyn by Richard Aleman