Chesterton writes about the artistic soul of Oscar Wilde

The time has certainly come when this extraordinary man, Oscar Wilde, may be considered merely as a man of letters. He sometimes pretended that art was more important than morality, but that was mere play-acting. Morality or immorality was more important than art to him and everyone else. But the very cloud of tragedy that rested on his career makes it easier to treat him as a mere artist now. His was a complete life, in that awful sense in which your life and mine are incomplete; since we have not yet paid for our sins. In that sense one might call it a perfect life, as one speaks of a perfect equation; it cancels out. On the one hand we have the healthy horror of the evil; on the other the healthy horror of the punishment. We have it all the more because both sin and punishment were highly civilized; that is, nameless and secret. Some have said that Wilde was sacrificed; let it be enough for us to insist on the literal meaning of the word. Any ox that is really sacrificed is made sacred.

But the very fact that monstrous wrong and monstrous revenge cancel each other, actually does leave this individual artist in that very airy detachment which he professed to desire. We can really consider him solely as a man of letters.

About Oscar Wilde, as about other wits, Disraeli or Bernard Shaw, men wage a war of words, some calling him a great artist and others a mere charlatan. But this controversy misses the really extraordinary thing about Wilde: the thing that appears rather in the plays than the poems. He was a great artist. He also was really a charlatan. I mean by a charlatan one sufficiently dignified to despise the tricks that he employs. A vulgar demagogue is not a charlatan; he is as coarse as his crowd. He may be lying in every word, but he is sincere in his style. Style (as Wilde might have said) is only another name for spirit. Again, a man like Mr. Bernard Shaw is not a charlatan. I can understand people thinking his remarks hurried or shallow or senselessly perverse, or blasphemous, or merely narrow. But I cannot understand anyone failing to feel that Mr. Shaw is being as suggestive as he can, is giving his brightest and boldest speculations to the rabble, is offering something which he honestly thinks valuable. Now Wilde often uttered remarks which he must have known to be literally valueless. Shaw may be high or low, but he never talks down to the audience. Wilde did talk down, sometimes very far down.

Wilde and his school professed to stand as solitary artistic souls apart from the public. They professed to scorn the middle class, and declared that the artist must not work for the bourgeois. The truth is that no artist so really great ever worked so much for the bourgeois as Oscar Wilde. No man, so capable of thinking about truth and beauty, ever thought so constantly about his own effect on the middle classes. He studied them with exquisite attention, and knew exactly how to shock and how to please them. Mr. Shaw often gets above them in seraphic indignation, and often below them in sterile and materialistic explanations. He disgusts them with new truths or he bores them with old truths; but they are always living truths to Bernard Shaw. Wilde knew how to say the precise thing which, whether true or false, is irresistible. As, for example, “I can resist everything but temptation.”

But he sometimes sank lower. One might go through his swift and sparkling plays with a red and blue pencil marking two kinds of epigrams; the real epigram which he wrote to please his own wild intellect, and the sham epigram which he wrote to thrill the very tamest part of our tame civilization. This is what I mean by saying that he was strictly a charlatan – among other things. He descended below himself to be on top of others. He became purposely stupider than Oscar Wilde that he might seem cleverer than the nearest curate. He lowered himself to superiority; he stooped to conquer.

One might easily take examples of the phrase meant to lightly touch the truth and the phrase meant only to bluff the bourgeoisie. For instance, in “A Woman of No Importance,” he makes his chief philosopher say that all thought is immoral, being essentially destructive; “Nothing survives being thought of.” That is nonsense, but nonsense of the nobler sort; there is an idea in it. It is, like most professedly modern ideas, a death-dealing idea not a life-giving one; but it is an idea. There is truly a sense in which all definition is deletion. Turn a few pages of the same play and you will find somebody asking, “What is an immoral woman ?” The philosopher answers, “The kind of woman a man never gets tired of.” Now that is not nonsense, but rather rubbish. It is without value of any sort or kind. It is not symbolically true; it is not fantastically true; it is not true at all.

Anyone with the mildest knowledge of the world knows that nobody can be such a consuming bore as a certain kind of immoral woman. That vice never tires men, might be a tenable and entertaining lie; that the individual instrument of vice never tires them is not, even as a lie, tenable enough to be entertaining. Here the great wit was playing the cheap dandy to the incredibly innocent; as much as if he had put on paper cuffs and collars. He is simply shocking a tame curate; and he must be rather a specially tame curate even to be shocked. This irritating duplication of real brilliancy with snobbish bluff runs through all his three comedies. “Lif e is much too important to be taken seriously”; [And here I thought that GKC said this!] that is the true humorist. “A well-tied tie is the first serious step in life”; that is the charlatan. “Man can believe the impossible, but man can never believe the improbable”; that is said by a fine philosopher. “Nothing is so fatal to a personality as the keeping of promises, unless it be telling the truth”; that is said by a tired quack. “A man can be happy with any woman so long as he does not love her”; that is wild truth. “Good intentions are invariably ungrammatical”; that is tame trash.

But while he had a strain of humbug in him, which there is not in the demagogues of wit like Bernard Shaw, he had, in his own strange way, a much deeper and more spiritual nature than they. Queerly enough, it was the very multitude of his falsities that prevented him from being entirely false. Like a many-coloured humming top, he was at once a bewilderment and a balance. He was so fond of being many-sided that among his sides he even admitted the right side. He loved so much to multiply his souls that he had among them one soul at least that was saved. He desired all beautiful things – even God.

His frightful fallacy was that he would not see that there is reason in everything, even in religion and morality. Universality is a contradiction in terms. You cannot be everything if you are anything. If you wish to be white all over, you must austerely resist the temptation to have green spots or yellow stripes. If you wish to be good all over, you must resist the spots of sin or the stripes of servitude. It may be great fun to be many-sided; but however many sides one has there cannot be one of them which is complete and rounded innocence. A polygon can have an infinite number of sides; but no one of its sides can be a circle.

From A Handful of Authors, currently out of print. Read about this book and Chesterton’s work as literary critic in the Chesterton University lecture. For more information on Oscar Wilde, listen to the talk, Chesterton and Oscar Wilde, by Joseph Peace. 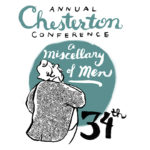